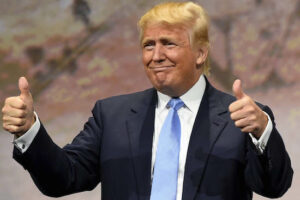 John Chen, BlackBerry’s CEO, may have just become a much bigger fan of Donald Trump. You see when President Trump signed the executive order rolling back President Obama’s restrictions on ISP’s sharing of personal information he basically handed Blackberry, a Canadian firm, a huge advantage. You see BlackBerry differentiates in the market by securing, not sharing, customer data. In fact, they go to great lengths to ensure that this information is secure even from BlackBerry employees. Even when information access would be beneficial to the firm, like using it to improve products, they use an opt-in and not the more Industry standard opt-out format. It isn’t a surprise that most governments, including the US Government, prefers a Blackberry solution because of this but it is unusual for a sitting President to hand such a huge benefit to a firm not headquarter in the US.

This clearly wasn’t the only good news for Blackberry this month. In addition, right in the Google annual report on Android Security, Blackberry was called out for their security efforts on Android and their PRIV for being one of the most secure Android phones.

There were a number of reasons why the PRIV got this honor one was the aggressive fashion updates are applied to the phone (many, if not most updates to Android are to address known security exploits). Another is that Blackberry’s unique Android solution largely makes phones using their technology immune to Root Kits which reside below the OS and are almost impossible to detect or remove once the user is tricked into installing them.

This isn’t all the BlackBerry based Android phones do either. The actually use a unique hardened Linux kernel which reduces what has traditionally been an unusually large attack surface on Android. Because these are used by governments the Blackberry devices have FIPS 140-2 certification required by Federal Information Processing Standards. They have the BlackBerry Secure Compound which enables a trusted execution environment for sensitive data and apps. And, finally, the current generation phones have DTEK, a security focused BlackBerry application which provides a real-time security assessment allowing the user to see what is happening on their phone and address any identified security issues (like settings that open them up to attack).

For companies and governments BlackBerry also partners with firms like Sentegrity to add even more security layers onto the phone. In this case to assure high risk endpoints.

US Promotion Of BlackBerry

This isn’t the first time a sitting US President promoted BlackBerry, albeit unintentionally. When the Snowden breach highlighted that the Obama administration had tapped Angela Merkel’s (German Prime Minister) phone because it wasn’t secure enough, BlackBerry was again highlighted as the secure alternative to what she had been using. Since she wasn’t the only head of state hacked and the US used BlackBerry phones themselves to prevent a similarly successful foreign hacking event on its own people, BlackBerry was again highlighted as the most secure phone for government and business work. The business side of this was reinforced by claims from Snowden that the German Government was not only complacent, but assisted the NSA in providing access to German citizen data. While the German Government disputes this aspect of Snowden’s position, the belief clearly has been driving people in the EU to BlackBerry solutions.

In fact, thanks largely to the US government of late, the BlackBerry platform has been the preferred alternative to consumer-focused phones using either iOS or Android by people who don’t like the idea of a domestic or foreign “Big Brother” looking over their digital shoulders.

In the end, all of this aggressive surveillance and related deregulation has governments, companies, and individuals looking ever more aggressively for more secure solutions. The iOS and generic Android products just aren’t secure enough and that has been, and will likely to be, a huge and growing benefit to BlackBerry which finds itself in the right place at exactly the right time.

5 HALLMARKS OF A GREAT GAME