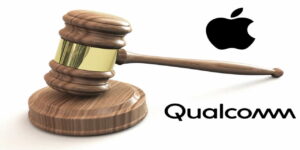 When it comes to corporate litigation, particularly when it comes to Anti-Trust, what goes around seems to come around consistently.  For instance, when Oracle and Google (among others) went after Microsoft in the UK, they focused the European Commission on US tech companies. Eventually, the EC went after Oracle and Google using the skills those two companies helped them create.  But even more Ironic is the litigation with Epic, the top-rated Fortnite developer, which looks like the reverse of Apple’s litigation with Qualcomm.  And Epic has a far stronger case against Apple than Apple had against Qualcomm (which they lost).  This outcome is because Apple complained of what they argued was a substantial Qualcomm tax that only amounted to a sub 1% for access to the technology that allowed the iPhone to work.  In contrast, Epic is complaining of a 30% tax to allow access to Apple’s customers for a game those customers want with little benefit to Epic other than customer access.

In the Qualcomm instance, Apple allegedly manufactured evidence to showcase Qualcomm’s guilt and failed to get the cost relief they wanted instead of effectively certifying Qualcomm’s revenue model.  However, many of those same arguments help Epic argue the same kind of price abuse but with far more substantial evidence given Apple’s substantially larger tax on Fortnite.

Let’s explore this recurring litigation problem and how it could weaken Apple over time.

What People And Companies Don’t Get About Litigation

People have grown up watching shows on litigation and somehow walked away with the view that trials work like on TV.   The good guys win, the bad guys lose, and everyone exits the process happily ever after.  That, sadly, is not how things work.  Truth has very little to do with litigation; the big lever is manipulation, and the side that can best manipulate the information presented to the court supporting their position wins.

Both sides tend to enter the trial process believing they will prevail but, generally, only one side is right.  But with the right resources, influence, and manipulation skills, you can often still win even if you shouldn’t.

In addition, the discovery process often surfaces bad practices and crimes that the executives that backed the litigation either weren’t aware of or thought they could conceal.  These disclosures can severely damage the chances of prevailing and, once in the record, can be used by others for subsequent civil and sometimes criminal charges.

I watched one trial where the defendant argued his business was very valuable only to have opposing counsel introduce evidence from his recent divorce.  In that earlier case, the defendant said his business had no value resulting in the devastating question, “Were you lying then, or are you lying now?”  In the case of Epic, Apple had similar exposure where Epic could use their arguments against Qualcomm against Apple.

In the litigation against Qualcomm, Apple attempted to paint the company as charging exorbitant fees and effectively holding Apple hostage with an unfair advantage.   But the relative valuation between the two companies, with Apple many times more valuable and powerful than Qualcomm, made this complaint hard to believe, as did the relatively low price Qualcomm charged Apple for the technology needed to assure the iPhone’s successful operation.  It is tough to convince someone you are a victim when you appear to be far more powerful than the company you claim is misbehaving.

But things are reversed with Epic.  Epic is bringing similar action against Apple, but Epic is far smaller than Apple is, and the percentage they are complaining about is around 30x higher. Apple’s very elements seemed to be manufacturing to wrongly argue against Qualcomm’s licensing model appear to be in evidence in their relationship with app developers.   And Apple’s argument that almost everyone else does this isn’t a defense of an abusive model any more than Qualcomm’s similar arguments.  Typically the defense of “everybody else does it” doesn’t carry much weight any more than pointing out that your spouse also speeds will get you out of a traffic ticket (but could get your spouse ticketed).

However, suppose Apple loses, which seems likely. In that case, the ruling could impact how much control all app stores have over their content and provide government oversight on the related charges.

Litigation is often a dual-edged sword, particularly if it was alleged in the Qualcomm case when a firm or individual tries to force an outcome not supported by evidence.  But, in this case, there should be substantial evidence of the Qualcomm litigation that Epic could use to showcase that those inside Apple may also agree with Epic.  Apple’s extreme profit and revenue make them look like they are taking advantage of their customers, putting Apple at risk, and, should Apple lose, it may put the entire app store model at risk regardless of who owns the store.

Litigation losses also create the impression of weakness, and when a company has as much cash as Apple has, appearing weak is problematic.   Constantly being presented as a company that will bend the rules to increase profits unfairly is hard on the brand and image.  Finally, at scale, Apple’s lock-in model makes them an obvious target for anti-trust actions since that model is inherently anti-competitive.  If they are forced to open up their platform, as Microsoft was by the EU some time back, it could massively reduce their profit and their ability to defend against competitive displacement.

Apple has a lot on the line, but my point is, their attack on Qualcomm weakened them substantially, making what likely would have been a non-issue with Epic into a battle they could now lose.  That loss could open them up to other related litigation and anti-trust challenges from entities like the European Commission and the DOJ, which was not happy with their Qualcomm attack.

Apple has far more at stake here than most realize, and their poor performance with the Qualcomm litigation increases that risk.  A good reminder that using litigation as a competitive weapon is ill-advised.

Are Smart Watches Really Worth all the Hype?