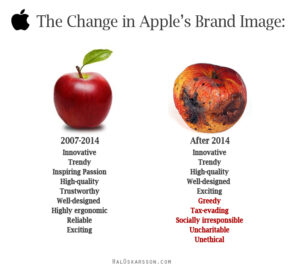 Apple is locked in a world-wide battle with Qualcomm over Qualcomm’s patents and to suggest this famous company which has a storied history and powerful brand is behaving badly is an understatement. For instance, when Intel couldn’t match Qualcomm’s execution on the coming 5G roll out Apple allegedly illegally took Qualcomm’s technology and provided it to Intel. In tech stealing someone else’s intellectual property can be devastating both the company it is stolen from and to the company that receives it because, in this case, this has a pretty good shot at destroying Intel’s modem business if Qualcomm’s claims are upheld (which seems likely given there appears to be a strong evidence trail). Apple has refused to pay their contracted payment and has even forced their suppliers to stop paying Qualcomm as well putting that company in distress and almost orchestrating a hostile takeover by Broadcom designed to gut Qualcomm. (If Apple had a strong case you could argue that they wouldn’t need any of these extra-legal activities).

Their latest move showcases just what a company with massive reserves, reserves that likely could buy Qualcomm for cash at its current valuation (if they could repatriate the money which has been kept offshore to avoid taxes) can do. I’m not sure yet if their move is inspired, or one of the dumbest things I’ve ever seen done so let’s explore.

Back in December Apple announced they would create 20,000 jobs in the US and invest $30B in facilities as part of their effort, heavily promoted by the current administration, to bring jobs into the country. Nothing wrong with that on the surface, this is part of a major government initiative to bring jobs back to the US though, currently, there are relatively massive skills shortages in several critical areas.

What makes this questionable however is they are in a Jury trial in San Diego and this week plan to do a major announcement talking about how they are contributing to the San Diego economy. This has the appearance of Jury tampering because of its timing during the trial. In addition, it suggests that the company will be attempting to cherry pick Qualcomm’s employees in order to gain intelligence on Qualcomm, which isn’t uncommon but is often illegal if it isn’t done very carefully, and it connects the San Diego Mayer to the Apple effort.

The trial is to determine monetary damages for Apple’s alleged illegal theft of Qualcomm’s patents and the jurors are likely all San Diego residents given the trial is located there.

Creating positive PR around a company undergoing what otherwise could be an expensive trial with damages in the hundreds of millions, if not billions of dollars, would seem an inexpensive way to sway a Jury to reduce your penalties. With the right level of visibility this could sway a Jury both in determining guilt and particularly in determining amount penalty because if a firm or person is doing something nice that will benefit you than you should feel better inclined toward them.

On the negative side though, this seems to be (given the timing) an obvious attempt to influence the Jury and Judges by and large are not fans of defendants’ (or plaintiffs for that matter) attempting to influence a Jury outside of the court. In addition, like we saw in New York with Amazon, bringing a lot of people into an area that already has high traffic may not be a positive by residents. Yes, the politicians love it, but they aren’t on the Jury and Judges are generally immune to political pressure. So, you could have a situation where the Jury goes the other way and the Judge resents the attempt to influence them which 272945799would backfire badly. Jobs seemed to get that when you make moves like this you do so covertly and subtly, but this seems to be neither.

In short, this looks to me like an ill-conceived attempt to sway the Jury which could do the exact opposite.

Wrapping Up: Apple Needs To Focus Back On Products

As I step back Apple hasn’t had a hit product since the iPad and Steve Jobs’ passing. All this legal stuff isn’t Tim Cook’s strength and when you have people that don’t understand the law trying to influence outcomes, it is my experience, that the result generally backfires. Even attorneys often get this wrong as you can often see when politicians, who are generally attorneys, get caught trying to manipulate the system.

Currently this litigation has the company partially blocked in both China and Germany regarding selling their products and it appears likely, given how hard it is to get around Qualcomm’s patents, that these blocks, judgements, and fines will continue to escalate. I get that this will damage their brand, but the right course of action is to stop behaving badly; not find new creative ways to game the system seemingly by executives that don’t understand the system they are gaming.

Apple was once about building magical products and great experiences, now they are about stealing intellectual property and ill-advised litigation warfare. The former company was once the most valuable company in the world, the latter company is trending in the wrong direction. Or, as a long-term strategy, this one appears to suck… a lot…

What are benefits of restaurant finder applications?