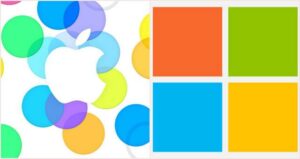 Much like Republicans and Democrats, the only political parties who count in the US, come down on different sides of the Obamacare debate (I’m not a fan) Apple and Windows users likely come down on different sides of the new campaigns Microsoft has fielded showcasing their Surface Supertablet against the MacBook Air and their advanced digital assistant Cortana against Apple’s creative speech to text tool Siri (you should check out the Arsenio Hall spoof of this I linked to below).

What is interesting about both of these campaigns is that they really aren’t about placing Microsoft products against Apple’s, they are focused on getting people to change how they look at Smartphone and Tablet device classes.  You see right now Apple with tablets and phones is the gold standard and the only company that has been successful against Apple at scale has been Samsung who basically created cheaper copies that you can buy in more places.

I don’t think Samsung’s strategy is sustainable and their declining numbers appear to support that belief.  To compete with Apple you have to change the game, not come up with cheap clones, and Microsoft’s ads are designed to do just that.

The thing is if you want a thin notebook there are a lot of better ones out there competing with the MacBook Air than Surface.  The target for this campaign isn’t the MacBook Air at all it is the iPad.   I could cite survey data but if you are like most iPad users you have wanted to use your iPad as a laptop for some time but every time you’ve tried this path you miss your notebook enough so that next time you travel you likely end up carrying both.  This solution is not only heavier but you have to keep both devices charged, one device can scratch the other, and there is a higher risk if you are rushed that you’ll forget one of them.  It is simply more stressful to have to manage two devices.

Many if not most iPad users would really like to be able to just carry their iPad.   Now Apple could build a MacBook iPad hybrid but they know that a device like this will cannibalize the sales of their PCs or tablets and they want you to buy both.

Surface isn’t the best thin notebook, is the best tablet that can do notebook tasks.   That is the core value proposition that the Surface is trying to get you to see.  If you need a tablet for work then the Surface is the better choice but you have to want that feature and these ads are designed to create that “want”.

This will get a lot more interesting when Intel’s Broadwell shows up in the Surface 4 and when Windows 9 shows up.  The combination of these two components has the potential to create a Windows 95 moment where the Surface isn’t just comparable but potentially far better than Apple’s offerings.  So think of this as a 1-2 step, Surface 2 is good, really good, but this platform is about to get vastly better and they want to make sure you aren’t locked into an iPad mindset when that happens and can therefore see the advantages.   In the end if you want a tablet that can be a notebook neither the iPad nor the MacBook are competitive and that is what this campaign is focused on getting you to see.

This campaign focuses on one of the things that Windows phones do as a class better than the iPhone does and that is provide a better digital assistant.  Apple made Siri an incredibly big deal and users were, for the most part, disappointed in the result because Siri isn’t as smart as the Apple ads led you to believe.   However while Siri is basically a speech to text engine wrapped in some very creative voice scripts, Cortana is actually an AI engine.   This means you can ask her to do tasks and she (well it) will.   Apple should be more vulnerable here because they set a very high bar with Siri (the Ad agency got a bit ahead of what the product could actually do) and then Microsoft figured out how to get a platform they’d had in development for decades to step in to the role Apple had written for Siri but Siri couldn’t play.

I expect Apple and its ad agency felt it was safe to overreach a bit because it was unlikely that anyone else had coupled a speech to text engine to search forgetting entirely the massive amount of work Microsoft has been doing with AI (and likely forgetting about Google’s work in this area as well).

I saw this happen once before with Novell and a product they called SuperNOS, they pushed it hard only issue was their product couldn’t do the job and Microsoft’s Windows NT fit that role far better.   Novell isn’t around anymore and while that won’t happen with Apple, this showcases how powerful a move like this can be.

Of course the iPhone has other advantages like App superiority but this gap is shrinking and Cortana can make a whole host of apps far more useful by enabling automated control.   But the fact that this campaign is creating really nice secondary content like this video from Bloomberg which favors Cortana, or this one from Arsenio Hall which is just fun, suggests the campaign is having an impact.

Wrapping Up:  Ads Are About Perceptions

At their core good ad campaigns, and Kathleen Hall the executive that heads this effort at Microsoft is considered to be one of the best at this, are all about changing perceptions and these campaigns should both do that.  The Surface campaign should get you thinking about wanting a tablet that can actually cover for your notebook and a digital assistant that can do what Apple promised but didn’t deliver.    But this is far from easy or cheap (we tend to be stubborn with our views) and Microsoft under Steve Ballmer had no stomach for long expensive campaigns.

We’ll see if Nadella, who has been pretty smart so far, gets how this works.   In the end if they get you to try either Surface or Cortana with an open mind these spots have worked, if you still see these products through an apple tinted set of glasses then they haven’t.  I expect this approach will work for folks that remain in the Windows camp and some of the fence sitters, Apple fans won’t be moved by anything short of divine intervention.  And even that might fall short.

Tech weirdness over the years (Part 1)