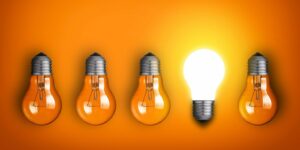 In the tech world, unicorns are a funny thing. Yes, everyone wants to be this rare, highly-successful firm that came out of nowhere, changing the whole game, but no one takes the time to look at what that takes. After all, having a company that truly makes a disruption doesn’t necessarily just look at what could be successful, but what’s broken and needs to be fixed.

Over the past few years, we’ve seen quite a few industries start to shift, which is why we’ve compiled a list of a few that are being flipped on their head.

Weddings have notoriously always been an expensive venture. What with the planning, location, event staff, hotels, catering, and the list could go on and on. Even conducting one on a shoestring budget is still a costly feat, which is why so many companies are going after the industry to bring the cost of that special day down significantly.

When it comes to planning, startups like Borrowed and Blue have not only made the process a lot easier but can curtail the high-cost points down quite a bit. For example, let’s say that a venue is incredibly important to you, but the food not as much, then Borrowed and Blue can make that happen for you.

The overall goal is these companies is to cut out the excess spending while simultaneously offer the curated and curtailed experience of what you envisioned. When you factor in that innovations are on the rise, expect there to even more options later on, such as on-demand DIY catering or even curated wedding gifts. Yes, it appears the wedding industry is about to be turned out, which could make the next couple seasons interesting to watch.

We’ve all heard about the impact that apps such as Uber and Lyft are having on the taxi industry, and it doesn’t look like they’re losing steam anytime soon. The multi-sided market these services have provided just couldn’t be matched by traditional cabs, as anyone could come along and become a driver at any time, increasing the supply to match demand, and in return, lowering the price. And even despite the negative press and backlash they (notably Uber) have received, these firms are moving well beyond just taxis and into the entire transportation and logistics industry.

With self-driving technologies steadily improved, companies like Uber have increasingly been making efforts to disrupt the logistics industry as well, going after distribution and home-delivery services. Additionally, companies like Amazon have also been entering the home delivery market as well, making strides with Amazon Prime Now, as well as experimenting with drone deliveries too.

Overall, this industry has had somewhat an archaic structure for a couple of decades, so it’s long overdue for a facelift. And with the added technologies that are making the industry even cheaper and easier to access, expect the transportation revolution to continue forward for many years to come.

Less than a decade ago, investing was viewed as a rich man’s sport, reserved for those enough capital to make substantial gains off their assets. People have generally viewed investing as a complicated venture, filled with a blend of politics, intensive reading/math, as well as a hint of knowledge on trends. However, that’s all quickly changed due to technology impacting how young people are shifting their views on money.

The app space is suddenly being filled with services that help Millennials and Gen-Z get into investing without a large capital reserve. With a focus on savings, the idea is that the money you’re already putting away can grow substantially over the course of a few years with the market. Plus, they’re making the process of starting out much, much simpler.

For example, apps like Acorns invest your spare change from debit transactions into an investment account. So, if you buy a coffee for $3.76, then they’d round up to $4 and put the remaining $0.24 in savings. Additionally, there’s also Robinhood, which has been lauded by both veterans and newcomers as the first trading platform with no fees.
As people using these services get older and see the results first hand, expect more players to come into the market in trying to capitalize on this trend.

Just blame Canada: lessons to be learned from a Viagra botnet