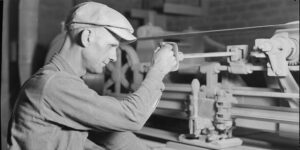 Empty factories devoid of humans. Is this our future? By the year 2020, five million jobs are expected to be replaced by robots. Robots and related technological innovation has been touted as the way to reduce the costs of labor. It is this push for automation and technology that is supposed to bring the Fourth Industrial Revolution: smart factories connected via the Internet of Things and populated with mini terminators (because you know they terminated all the human workers).

Where have all the People Gone?

It is expected that the manufacturing sector will be impacted greatly by this boom; but what of the displaced humans, which is expected to include 47 percent of U.S. jobs at risk from automation? Industry 4.0 may gain efficiency and build web connections, but believing the changes will come is different than wanting them to. Not all organizations may welcome this role reversal and regulations and security may fall by the wayside. With less attention placed upon human personalities, companies could neglect the “always-on” connection. And there may be an assumption that the information shared is not a secure because it “only” passed through a machine rather than through human hands. The authenticity of material is often taken for granted when dealing with people. This same legality may or may not be present or taken as seriously within automation.

But what is pushing this automation? Why do we need this many jobs to be held by robots? It does increase production—but at what cost? Technology begets technology, so one might argue where does it end, or does it? Profit margins certainly increase for businesses employing automation and the global market seems to get smaller and smaller, as cross-country dealing becomes simplified. But it also produces a society dependent on the latest gizmos and equipment.

And there is a belief that these automated connections are “smart.” And if these devices are working in tandem or more, “smarter” operation will flourish. It would take a human longer to achieve this same business process conclusion. But this begs the question, what is the rush? Not when it seemingly removes one of the most critical elements of labor: the human.

Consider the current human/machine dynamic present in many a manufacturing plant today: less workers might be seen but not necessarily less efficiency. In fact, the processes have been improved as lower level automation encouraged individuals to develop higher technical skills and become more aware of managing business processes.

Additionally, companies did not need an industrial revolution to develop other efficient processes. By utilizing the experiences, insight, and data collection of operators, businesses increased their competitive edge and time-to-market of products. Robots may seamlessly complete a task, but the only data retrievable from them is the data you request it give you. This severely limits analytical use of the automation.

From a socioeconomic impact, this automation surge is not expected to impact humans equally. The rich are likely to see greater gains than the poor, as their low-skill jobs are the first to be replaced with high-tech machines and controls. Of course, as the other industrial revolutions have shown us, the wealthy benefited first from the advances and they soon trickled down through the rest of society. In today’s world, this new workforce dynamic may take time, but it would be assumed that society could absorb the structural business and social changes.

But a workforce built upon technology and automation cannot function under the same business model as when more human interaction was required. Business strategies must be rethought to assess production, human involvement and future growth, in terms of revenue and job growth. Machines may operate without needs; but that does not mean job growth can remain stagnant. The future has already brought more riskier tasks being done by machines with guidance and monitoring from human operators. Governmental approaches or responses also help determine the pace and how widespread the adoption of automation will be.

Light at the End of the Tunnel

As humans, it is natural to consider ourselves irreplaceable. Exactly what makes robots so distant is what makes humans, so human. We crave interaction and stimulation, and work (or at least activity). We are also a consumption society. We seem to believe that having stuff creates happiness. If “…technology…surpass[es] our human interaction[s Einstein once said], [t] world will have a generation of idiots.” Technological change continues to come. It becomes not a movement to resist, but a moment to reflect. The battle for manufacturing jobs between humans and robots is not over.

In the final analysis, this so-called fourth industrial revolution will be unlike any other we have experienced so far. The cognitive (AI) advancement of machines, the emphasis being on the word ‘cognitive,’ will impact human decision-making in the workplace for the first time in history.

How technology is revolutionizing healthcare