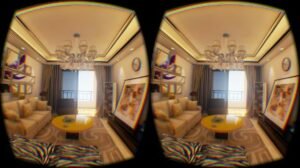 Technology has transformed the way we search for a new home. Instead of waiting until a weekly newspaper pullout or peering through an estate agent window, we can now pinpoint scores of potential properties with just a couple of clicks of the button. This has drastically sped up the process of house hunting and helped to ensure that the buyer in the digital age is more informed than ever before.

But, as well all know, technology doesn’t stand still. So, that begs the question ‘what next?’.

Virtual Reality is no longer the preserve of sci-fi films, it’s here. Headsets such as HTC Vive, Samsung Gear VR and Sony Playstation VR look like being the vanguard with Microsoft’s Hololens and an Apple set to come in the not-too-distant future too. Gaming will, clearly, be one way of harnessing the power of this technology, but there could be other practical uses for this too.

A new report by The Future Laboratory suggests that virtual reality could easily form part of a property search. It would allow a prospective buyer to walk themselves through a virtual tour of the home they wish to buy, offering an experience more interactive and informative than a gallery of pictures could ever muster.

So, will this be the next big change for buyers and sellers? Will we all soon be popping on a headset? Will sellers need to cater for people wearing headsets rather than turning up at the door?

More of the process is already going online

In some respects, house hunting online only represents the first wave of change that the internet can bring about. While a property search can be conducted with a few clicks, the next stage often reverts to the old way of doing things for the vast majority of buyers.

Yet that, too, is changing. New online firms are springing up to ensure that the sale can be handled online as well as the search, cutting the costs and hassle of dealing with an estate agent in the high street.

If you’re moving home and ‘sell house quickly’ is on your wishlist, then you are able to get a quote within 24 hours and a sale within a week from online sellers.

Gone are the days where selling had to be long-winded or the process of buying had to end online after the search.

VR might be part of the mix when it comes to buying and selling houses in the future. It first has to become a widespread form of technology and that, in turn, means impressing consumers with the first wave of products that are hitting the market. The calibre of the companies involved means that you wouldn’t bank against that success.

While estate agents could readily hand out headsets in their offices within months, for the change to be truly transformative it needs buyers to be able to take a tour of their new home from the comfort of the old one.

By that time much of the process could well be online anyway. VR, drone camera tours of neighbourhoods and even dating style apps will merely build on that in the next five to ten years.

Organisations Are Shifting Their Cybersecurity Strategies From Reactive To Agile