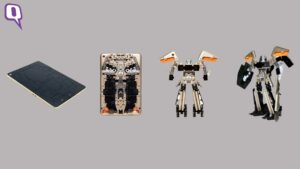 Xiaomi recently launched the Mi5 smartphone, but the Chinese giant caught us by surprise as they also recently came out with the Mi Pad 2 toy – a toy that turns into a Transformer.

In collaboration with Hasbro, a US-based toy and board game company, Xiaomi made this idea come to life.

The toy has been launched as a crowd-funded project and is priced at CNY 169 (Approximately $25). It will begin shipping in China starting 13 May 2016.

The Mi Pad 2 toy is similar in shape and size to Xiaomi’s actual working tablet, the Mi Pad 2.

Virtual Reality Viewings? Is This Really The Future Of Selling Our Homes?