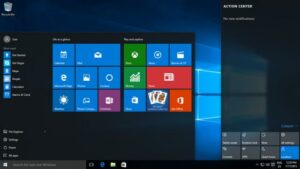 The Steve Ballmer years at Microsoft were full of good ideas that either were killed or under resourced.  Under Steve they really didn’t have an innovation problem, they had innovation up the wazoo (technical term) they had an execution problem they either killed the ideas prematurely or didn’t fund them to success.   Products like the Media Center (better than TiVo), Zune, Bing, Curier Tablet (this last was a real shame), Kin, and the Windows Phone all had great potential but never rose to that potential largely due to underfunding and poor execution.  With Windows 10 they have another very innovative concept, the idea of making a Smartphone into a PC, something that neither Apple nor Google are willing or able to execute on at the moment, and if Microsoft can execute they could spin the market like a top.

We watched Apple and Microsoft fight for over a decade and Microsoft schooled Apple at every turn until Apple stepped out of Microsoft’s shadow and created the iPod/iPhone/iPad.  In all three cases Apple wasn’t trying to create a better PC, they were creating something very different, though, ironically, over time, their creation became the biggest threat the PC had ever seen.

These devices snuck up on Microsoft and now Apple is basically where Microsoft was in the 1990s, seen as unbeatable.  They didn’t run at Microsoft head on they flanked them first on MP3 players then on mobile in general and then it was Microsoft’s turn to learn you can’t take a dominant head on.

Microsoft has two moves.  Their first is to go that extra step before Apple or Google can.  You see we saw with the iPad in particular that users wanted the tablet to actually take the place of the PC not just take the developers and revenue momentum.  But Apple wanted their customers to pay for a line of products and a product that converged the lines (a tablet or smartphone that would displace a Mac) doesn’t make sense to them economically.

Microsoft saw this rightly as an opportunity and with Windows 10 is, and has, created an OS that can turn a Smartphone and a tablet into a full PC.  Their first major effort with Surface which showcased that a tablet and a PC could be the same thing without any major compromises.  The second step is to showcase that a Smartphone can do the same thing.  But that is only one move.

The second move is to create something like Hololens that could displace all three and catch everyone napping.  But for that to work the technology will need to advance, become far lighter, far more affordable and get the kind of developer interest that the iPhone and iPad initially received.

But to pull any of this off Microsoft will have to execute sharply, that means doing what the old Microsoft was unwilling to do, and fund the effort not based on what someone believes is adequate but funding it to success.  If you look at Zune, Windows Phone until now, and Bing funding and resourcing has been below success levels (often massively below) largely because the numbers seemed to the decision makers as being incredibly high already.   But whether it is flying to the moon, winning a race, or bringing out a successful product success isn’t measured by whether your expenses appeared reasonable it is measured by actual sales success.   So the budget that should be implemented is one that assures that success not one that compared to any other metric and this has been a hard lesson for all of the technology firms of late.

We saw this demonstrated a few years back when Samsung massively outspent Apple in marketing and actually took significant share.  Unfortunately this spending was not sustainable so Apple took the share right back suggesting even Samsung had, after demonstrating how to do it, become unwilling to actually follow their own lesson because it was too expensive.

Microsoft has a huge opportunity but it comes with an equally huge cost to pull it off.  This isn’t a build it and they will come market.  Microsoft not only has to build the solution they have to convince people that it is better and, if they do that, they likely can do to Apple and Google what Apple and Google did to Microsoft.  Pulling this off would be huge and alone would likely make Microsoft again the company to be reckoned with.  Properly funded they have the potential for a huge upset, underfunded they get another Zune but with far greater adverse impact.  Once again Microsoft has an incredibly innovative idea but execution trumps good ideas every time.

Let’s turn off the Internet

An operating system should be invisible