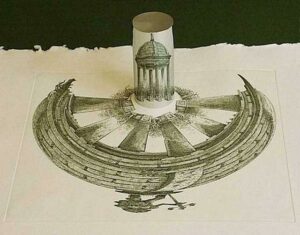 Way back in the late 90’s when I was the Technical Editor for Interactivity Magazine, I saw a technology demonstration from a company based in Silicon Valley that I thought was pretty impressive. I can’t remember the name of the company (I’m not even sure if they still exist) but the basic idea for their new product was a remarkably simple idea with some pretty impressive tech behind it.

The company had created a special camera lens attachment that was nothing more than a mirrored cone with a slightly parabolic curve – sort of shaped like the bell of a trumpet that flared outward. When mounted on a digital camera the mirrored surface created a highly distorted 360 degree image. Feed that image into a computer with the right software to un-distort the image and you get a 360 degree panorama – no stitching of multiple images required.

It was kind of a high-tech, inverse version of the anamorphic art technique developed in the 16th century where placing a mirrored cylinder on a distorted drawing would reveal an undistorted image.

One of the advantages of the curved mirror attachment was that the 360 degree image could be captured with one quick click. The company originally thought their mirror/software combo would be used in the real estate industry for taking 360 degree panoramic images of rooms inside homes for virtual walkthroughs.

But then one of their engineers realized they could also mount the mirror attachment onto a digital video camera and capture 360 degree moving video. Now that was a brilliant idea. The company only had a few test videos at the time I saw their demonstration but one video clip was taken at the start of the Boston Marathon and you could watch the runners coming toward the camera or rotate the image 90 degrees and watch them running past the camera or another 90 degrees to watch them as they raced away.

One of the reasons I mention this technology is that I wonder why Google didn’t adopt it for their Street View maps and self-driving cars? Currently they use a large, awkward multi-camera contraption that has to be mounted on top of a vehicle to take the 360 degree street view shots which are stitched together later. Then they drive a half a block and take another series of photos, etc.

Their self-driving cars use a spinning mirror device (also large and bulky) mounted on the roof of the car.

If they had chosen to use a parabolic curved mirror approach each shot could be taken with a small digital camera with one shot (there are dozens of companies selling mirror devices like this small enough to mount on a smart phone). They could also attach it to a digital video camera for seamless transitions as they drove around the streets of the world.

The other reason I bring up this technology is that ever since I saw that demo all those years ago I’ve been wondering if movie producers could also make use of it. How would you script a movie if the people who were watching it could rotate their view of each scene 360 degrees?

Yes there would be obstacles to overcome – you couldn’t have a lot of lights, microphones and crew members standing around off camera since with a 360 view there wouldn’t be any ‘off camera’ any more. Actors would also have to do a lot more reacting even when they weren’t delivering lines since some viewers would be looking at them even when the action was happening somewhere else (if she was in a scene I’d probably be watching Halle Berry no matter what else was going on). And you might have to get creative about moving the camera around.

But I do think you could create some mighty interesting films tailored to 360 degree viewing.

EU’s anti-trust case against Google is all about money