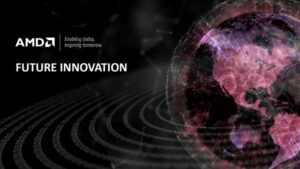 If you were wondering why AMD’s stock was up it was because the executive team on Wednesday met with a bunch of financial analysts and chatted about the future.  Lisa Su, AMD’s new CEO, is one of the few CEOs that has been formally trained to be a CEO thanks to IBM’s unparalleled executive resources program.  This means she has a balance of skills from understanding what makes a company run to understanding what each of its constituencies wants to hear.  More important she was one of the leading engineers in IBM Microelectronics and has been one of the stars at AMD ever since she was hired by interim CEO Rory Read who was first tasked with turning around AMD.  I’m a big believer that companies like AMD have to be run by  subject matter experts because only they can both craft a winning strategy and execute it knowing both what is needed and how to get there intimately.

Most CEOs also tend to live quarter to quarter thanks to compensation programs that are heavily weighted on quarterly performance so seeming a presentation like this that focuses several years out is unusual.  They are critical to turnaround efforts though because these take 3 to 7 years and if you can’t get investors to believe in the future they’ll never invest in you today.

Let’s talk about the future according to AMD.

One of the major efforts that AMD is focused on is called LiquidVR and it is focused on creating a common standard for Virtual Reality which they are expecting to go vertical by the end of the decade.  With products like Oculus Rift and Microsoft’s HoloLens coming to market in the next 24 months it isn’t a bad bet to make but it will require a lot of specialized silicon because you have to render, create physics, and end up with images that look like reality if this is going to meet expectations.

This isn’t just software either, specialized silicon will be required and that takes years to develop and AMD has indicated they have already started down that path.

A lot of us are coming around to the idea that most of the apps we run on our mobile devices won’t actually be running on mobile devices in the future.  As bandwidth continues to expand and screen sizes grow the desire to run ever more capable apps on mobile devices increases as well but we still have very difficult power and related battery limitations.  Oh, and I should add we are putting increasing levels of intelligence in these applications which requires lots of data and even more performance.  Mobile technology not only isn’t keeping up it can’t so much of this will have to run in the cloud much like Sire and Cortana mostly do today.

This means a very different kind of server load than we are currently used to, one optimized for very low latency so that the latency in the network can be offset.  AMD is in the process of developing unique server processors that the will target at this opportunity when it becomes more pronounced in 2017 on and, assuming it works, that means you mobile devices as we end the decade will get smaller, lighter, and far more powerful because that power will come from the cloud.

One of the areas where AMD has been very successful is with semi-custom processors.  They dominate console gaming with this effort which is targeted at meeting the unique needs of designers and developers building unique things.   With 3D printing, ever more intelligent stuff (like self-driving cars and eventually self-flying cars) driving unique requirements AMD is imagining a time when we will be surrounded by a lot of things we can’t even imagine today.  I call this bucket “crazy stuff” but we are freeing up the imaginations of kids coming out of engineering schools and they’ll need a microprocessor company that can help them bring their dreams to reality and not force them to buy off the shelf.

AMD is anticipating this and increasing their semi-custom effort so a lot of this “crazy stuff” we’ll be surrounded by will have AMD inside.

There is movie coming to the screen from Disney, that I’m particularly looking forward to, called Tomorrowland and it is roughly based on a concept that Walt Disney created for EPCOT Center.  While the EPCOT dream died with Disney, it is carried on by companies like AMD and Microsoft who are working to create things that will amaze us in a few years.   Apparently a bunch of financial analysts agree and are also looking forward to a Virtual Reality future where most of our mobile apps run in the cloud and where we are surrounded by a lot of increasingly strange and increasingly amazing crazy ideas that could have come from Disney’s vision.

The Most Important Metric in Social Media