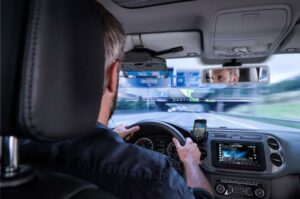 I grew up with James Bond and I fell in love with the James Bond cars.  My three favorite movies are Goldfinger when we first saw the Aston Martin, followed by Die Another Day with the Aston Martin/Jaguar XKR battle on ice, and finally Skyfall when the original Aston Martin returns, saves the day, and then dies a sad death.   (Just watched that again and actually got tiers)  I even had an FLIR military grad Infrared Camera installed in my own XKR to give it more of a James Bond vibe.  Well what may be the ultimate James Bond like accessory is coming to the Mini and it is pretty cool.

Let’s talk about that.

There is a back story that when Goldfinger was first being made they wanted to use an XKE but that car was so popular back then they couldn’t get one and Aston Martin stepped up and the rest is history.  Since then you see Jaguars being driven by Bond villains (thus their Good to be Bad) campaign but never by the heroes.  BMW made it into a couple movies though the weapons they got never really were used (the car wasn’t destroyed either).

So it is interesting that both BMW and Jaguar have had early showcases of Augmented Reality which looks like something that should have come out of Q Branch (the folks that made the James Bond toys).  Jaguar with it installed in the windshield and BMW’s Mini unit using VR glasses.   The advantage to the former is that you don’t need glasses and the advantage to the latter is that it should be cheaper (particularly if you get a rock in your windshield like I did last week, ironically while driving to the Mini reveal), the display moves where you look, and you can use the glasses outside of the car like on a motorcycle, bicycle, or when you have to walk someplace after parking your car.   This isn’t so you can just find where you are going but so you can find your way back as well.  You can also get additional information with the glasses if you look at coded pictures or posters.

The windshield approach looks cool but I think it is too expensive and too limiting.  For instance with the Mini version, which was developed with QUALCOMM’s Vuforia division, you can interface with the cameras around the car and see how close you are to the car in front of you (if there is a front mounted camera) or to the curb when parking saving the need to have to buy a new expensive wheel prematurely.

Both systems will show heads up navigation.  The Jaguar creates a ghost car that you can follow and the Mini version uses dynamic arrows.  Personally I’d like a choice because I’m not sure which would actually be better in use (I expect the car approach would be better on the track to get the best track time, and the Mini approach for street navigation).  Both should also be able to display virtual gauges, phone message alerts (and the messages would be read to you), and entertainment (when parked).   Though, with the glasses, the passenger could see entertainment when the car was moving and wouldn’t be distracted by the information the driver is looking at once again showcasing that the glasses approach, if they can be made attractive enough, would have the higher utility.

I tried this with the Mini and it was like having X-Ray vision, I could look right through the lower quarter panel and see the curb using glasses.  Now if they worked like real X-Ray Glasses I can imagine they’d make a lot of teenage boys and attorneys of any age really happy.

I would expect both versions to benefit from smart glass technology (so they will auto darken) and from Gorilla Glass to make them more robust but Corning hasn’t been able to get this technology to work with Windshields yet which would be problematic for Jaguar.

AR is an interim step between what we have today and the self-driving cars of tomorrow and it should allow you to stay driving on the road longer once self-driving cars are hear because you’ll be far better connected to the electronic world going on around you.

Now, of course, I’m thinking a great additional enhancement would be to feed the IR camera into either system so I could see much better at night.  In any case in a few short months you’ll get your choice of of two amazing new systems that will let you just have a taste of what it might be like to own a James Bond car.   I can hardly wait.

Next Transformers May Be Ready in 2017