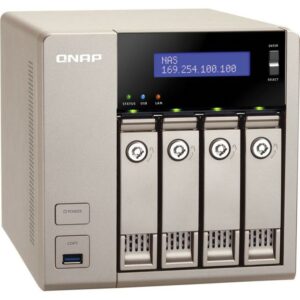 It’s been a long while since I’ve had a Small Business NAS into the shop to test and a lot has apparently happened between then and now.   I recently received the AMD powered QNAP TVS 463-4GB NAS to review and this amazing piece of equipment works more like a server than just a dedicated storage device.

It amazes me how far this class of product has come in just a few years evolving from a simple storage device to a full featured private cloud server appliance.

Part of me is amazed and part of me is a little overwhelmed with the massive number of applications and capabilities in this amazing little box.  It is kind of the Swiss Army knife of NAS boxes and I could likely spend the better part of a month learning all it can do.

The QNAP 463 comes in 4 configurations each capable or running terabyte drives ranging from 4 to 16 TB of capacity.   As with most current generation products the drives are hot swappable and come with key locks.   It is also configured for a Kensington cable lock which would be a good idea given it isn’t very large or heavy.   While I didn’t notice or have any overheating issues I have noticed that some using high performance full sized drives have complained about excessive heat.  Since it ships without drives I used laptop SSD and one laptop sized hybrid drive and that seemed to allow enough airflow to keep the heat down to manageable levels.   I set for RAID 10 which took my nearly 4 TB of non-redundant capacity down to 1.8 TB which should work faster and more reliably.

It comes with 2 GB RJ-45 but you can add two additional ports via a PCI-E card (or 10 Gigabit LAN capability).  It has 5 USB ports for accessories which you can access remotely (other drives, printers etc.).

I’m used to talking about the difference between the numbers of apps in the various phone systems this I’ve never even thought that I’d do this with respect to a NAS.   These all come ready to install but you can pick all or none of them depending on what you want to do.

Dedicated Stations:  There are dedicated apps for photos, music, file management, downloads, and Surveillance (creating a security camera log).  Each automatically organizes what you upload into it and each is easily navigable from the web interface front end of the device.

I was going to list each of the preloaded apps but there are actually pages of utilities that range from system management and data management, to games and connectors to cloud services like Microsoft’s Azure and it even has virtualization app so you can .

This has built in transcoding care of the AMD APU and this means you could use it as an impressive video server in your home or business and it has IR for a remote and twin 4K monitor support for viewing videos particularly security videos were you to implement it in that fashion.

The QNAP 463 is really like no NAS I’ve ever seen.  It is more like a server appliance and it has utility that extends rather impressively into small business or the home.  This doesn’t come cheap however as, without drives (which have become surprisingly affordable over the last few years) it comes it at around $861 on Amazon for 4 bays and 4GB of memory taking it to 8 drive bays and 8 GB of memory will jump the price to $1,200.

It comes with an impressive number of Open Source applications but while a novice can get to its basic NAS functions easily the products full capability will require some experience to truly reach its full potential.

If you are looking for a relatively rich appliance cloud server in a box the QNAP 463 running the Linux based QTS operating system is an impressive level of kit.   Best for small business or the high end prosumer the QNAP 463 shows just how amazingly far NAS has come over the last several years.  I’m simply amazed at how much this little product can do.

Granted playing Super Mario Brothers on this reminded me of the time a friend loaded Star Trek on one of the large IBM mainframes and crashed half the company, the game did crash the first time I tried to run it on the device, but the server didn’t miss a beat. Another thing that has changed for the better.

Internet security – we were worried about the wrong things

Game of Thrones Season Five First Review is In