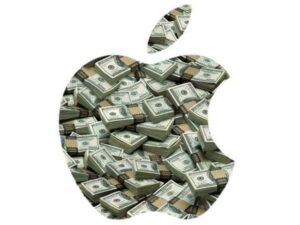 You might think that Apple is primarily a hardware company but in recent years it has gradually shifted its business to an online, incremental purchasing company that just happens to make hardware people can use to buy other stuff.

Back when Apple came out with the iPod a new market was created and it wasn’t entirely about selling little boxes that played music. The iTunes Store debuted almost simultaneously with the iPod in 2001. Primarily set up to sell music, skins and ringtones eventually it was expanded to include videos, podcasts, apps and other digital assets people could buy for download.

Over the years Apple has made millions (perhaps billions) of dollars selling songs – songs that other people wrote, played, recorded and marketed.

In the years that followed Apple released iPhones and iPads and along with them came Apple’s online App Store. Since its introduction the App Store has generated even more billions of dollars in revenue for Apple. Apple gets a 30 percent cut of every app sold. In 2013 Apple said users spent over $10 billion in the App Store, so in one year alone Apple made $3 billion selling apps that were conceived, written and marketed by other people.

Now Apple wants to become the middleman in the retail industry with their introduction of Apple Pay. The system works with the newest iPhones (and other mobile devices with near field technology and the right apps), and lets users make purchases in stores with a wave of their phone. It’s supposed to be more secure than using a credit card and if the system ever takes off Apple will take a ‘modest’ 0.15 percent cut of each transaction.

This takes the App Store and iTunes model to the next level. With Apple Pay the company no longer has to store, keep track of transactions or implement an infrastructure to download content to Apple devices. Now the stores locate, display, market and deliver products (again made by other people) and Apple gets a cut simply for enabling the sales transaction.

Apple’s Tim Cook said that the company isn’t interested in gathering any customer shopping information and there are two good reasons for that. First, Apple doesn’t want to expose itself to potentially massive security breach headaches or privacy issues. Second, we Americans buy a LOT of stuff every day, probably trillions of dollars of stuff and if Apple can take a 0.15 percent cut of those trillions it will definitely climb into the billions of dollars in profits quite quickly. And it will cost Apple next to nothing since the retailers will purchase and install all the necessary hardware for them.

Less than two weeks after Apple unveiled the Apple Pay system, Tim Cook said in an interview that the state of television was atrocious. I’m guessing this is a run up to Apple trying to get into the pay-per-view business where people either subscribe to an Apple service similar to Netflix or Hulu to download movies and television shows to their iDevice or TV sets or they rent or purchase them on a show by show basis.

Apple may sell a lot of iDevices but these days it seems like these are just devices to facilitate the purchase of things that Apple didn’t make. There is a kind of genius evil about all this. Perhaps one day Apple will even sell off their hardware divisions and concentrate on incremental retail transaction payments, App Store and iTunes downloads and other financial service revenue streams.

We are the customer and the commodity