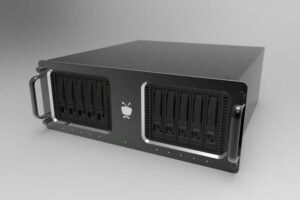 TiVo, one of the original creators of the DVR, has announced a 24TB, massive DVR called the TiVo Mega capable of storing up to 26,000 hours of SD programming or 4,000 hours of HD.

The price for this example of excessive over consumption is expected to be around $5,000 and the device will ship sometime at the beginning of 2015.

The Mega will feature hot-swappable hard drive bays with a total of 24TB of RAID 5 storage. RAID 5 is striped for speed, like RAID 0, but with parity data spread across the drives for redundancy (if one drive dies, you can slot a new one in without losing any data). It also has six separate TV tuners built in and like everything in life these days it will come with an app to manage all that content and a Slide Pro QWERTY remote control.

Showing off the Mega at the Cedia Expo this week Tivo’s Ira Bahr said, “TiVo Mega offers more than twelve times the storage of any cable or satellite DVR. TiVo Mega is the solution for the power user who wants to record everything. We salute you and enjoy!”

We have become a society of on-demand everything particularly when it comes to our viewing habits. People have moved away from watching programming only when it is being served. We record just about everything for viewing when (and if) we please or we just watch that programming on-demand or online.

I can see the TiVo Mega finding a home in many professional sports figures homes (so they can record every single game from around the league while their team is on the road). Obviously there will be a handful of millionaires who have already sunk thousands and thousands of dollars into their home theaters.

But I think this is more of a publicity stunt to get TiVo back into the news and not a product that they expect to sell tens of thousands to the general public.

I also doubt that anyone who buys one of these monsters is actually going to be watching everything they record – they’ll just have more shows they will never watch than the rest of us.