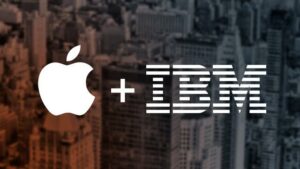 IBM’s recent partnership with Apple has made a lot of noise in the tech industry. While this isn’t the first time Apple and IBM have attempted to work together, the new partnership has the potential to have a much larger impact. In fact, some have speculated that the Apple/IBM partnership may blossom into a full merger of the two companies. If Apple and IBM do merge, it could help Apple bridge the gap between consumer and enterprise and truly give Microsoft a run for their money.

Rob Enderle covers a wide array of technology companies and related industry topics and is frequently contacted by the media for his opinion on breaking news and other happenings in the technology realm. He has been labeled one of the most quoted technology analysts in the media.

Mary Enderle brings ten plus years of high tech industry background in the computer industry as a brand consultant focusing on digital branding from an interactive perspective with over ten years in web design consultation and brand identity consultation. Mary also helped to launch www.cafegive.com where you can shop and a portion of your proceeds goes back to help a non-profit.