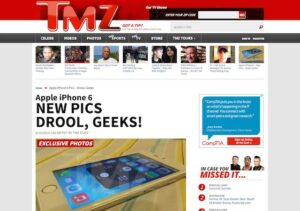 TMZ, which usually spends its time unearthing celebrity gossip and misdeeds, just make a reality star out of the iPhone 6.

An individual has sold images of the iPhone 6 to TMZ claiming that  a friend smuggled the pictures out of a Foxconn factory in China. Foxconn is Apple’s chief contract manufacturing partner.

There is some doubt as to the veracity of the report even though TMZ is in the habit of getting some pretty amazing scoops but it is interesting that a site that normally limits itself to shots of celebrities outside of clubs, or the Kardashians doing whatever it is the Kardashians do, should be scooping on an iPhone 6.

But, TMZ is smart. Rumors surrounding the iPhone 6 are as big a pull as rumors about a Jay Z and Beyonce divorce. Who cares if any of it is really true as long as the speculation entertains us.

Obviously, mainstream tech sites are not too happy about this:

Meaning that even if the iPhone 6 does end up looking something like this, what TMZ has right now almost definitely isn’t it. So while we do appreciate your enthusiasm, TMZ, maybe just stick to dick pics for now.

9to5Mac.com, which is probably the most knowledgeable site for this kind of rumor, has a good take on it, but the tech sites seem to be missing the point. TMZ, like most of these tech sites by the way, can say any crap it wants about the iPhone 6 and Apple rumors.

Ultimately, all the speculation about what Apple will actually launch on September 9th is meaningless. It is no different than speculating vapidly about celebrity lifestyles. iPhone 6 rumors in the tech press = the journalistic integrity of TMZ.

So, I say to TMZ, good for you, guys. If it gets you hits and you can market these rumors on your site, go for it. Don’t take the criticism to heart. Most of the tech press is speculative ramblings and opinions around the very controlled PR of the major tech companies. The tech press has no power to change anything.

FCC and Net Neutrality: no Internet and no neutrality