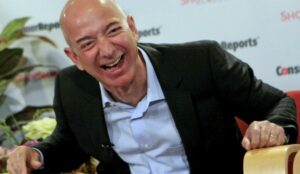 Amazon is widely expected to release its own phone. Amazon has tablets and it has a TV set-top box. It has AWS which handles cloud services for enterprises large and small. It has FBA which handles goods for merchants from storage to sale to delivery. Amazon has it all.

The Internet is fast becoming a series of theme parks where we, as users, get a chance to play as long as we pay the price of entry, wait our turn in line, and act like good citizens.

Facebook is its own ecosphere by virtue of its membership. Google corrals the web with search, Gmail and YouTube. Apple gets you on hardware tied to a very controlled software distribution model. Amazon just wants to be near your trigger finger with easy access to one-click shopping.

Facebook sells our profiles and targeted marketing messages. Google sells our habits. Apple just sells us premium branded hardware and digital goods that only work on that hardware. Amazon sells us whatever we need whenever we need it.

I saw a kid in a store the other day, a sneaker store that’s found in any mall in any part of the country. He had his iPhone out and was checking sneakers. His friend came up and asked him if he was going to buy a certain set of sneakers and the kid said he probably would but he was looking for a better price online.

And that’s where an Amazon smartphone may prove to be most dangerous. It can be a weapon that Amazon customers can wield very effectively to get the best deals for themselves and possibly to opt for Amazon as a default at any time.

Or, it could be Amazon’s greatest big data play, allowing the company to amass data on our everyday habits, everything that makes us great consumers.

The Internet isn’t so much about sharing and information anymore as it is about shopping and advertising.

Rumors of an Amazon smartphone have swirled for years, so everyone is assuming this new hardware is a phone based on the promotional material Amazon has released so far. BGR, which has a pretty strong track record of coming through when it comes to Amazon leaks, even claimed to have photos of a prototype device.

There are some pretty compelling reasons that Amazon would want to break into the mobile phone business. While the company got its start selling physical books and grew to sell almost any item in the world through a single Web site, Amazon has increasingly invested in digital services, from cloud computing to e-books and online video rentals. Its forays into the hardware space, including the Kindle line and FireTV, serve as direct portals between consumers and Amazon’s online marketplace. But without a smartphone, it is missing out on chances to sell to customers when they’re on the move.

Apple’s got new and cheaper 21.5in entry-level iMac

Breaking Bad in 4k glory is now available on Netflix