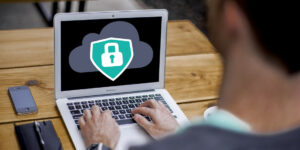 We will take you through a few ways which are guaranteed to protect you from most of the attacks that occur on a public Wi-Fi network. We will also acquaint you with some of the major types of attacks that can occur so that you have a better understanding of why you need additional security.

Using a VPN is perhaps the most important measure that you can take. A VPN will route your traffic through a secure server and encrypt all the data that you send. All of the security features that come bundled with top VPNs will eradicate most of the problems that users might have during public Wi-FI use.

We recommend you use ExpressVPN. ExpressVPN is by far the most popular VPN in the industry and it has some of the best protection bundled with great speed. Although ExpressVPN is a little bit more expensive when compared to some of its competitors, the quality of service they provide has allowed them to be considered the best VPN available today.

How a VPN will protect you

There are many different kinds of attacks that can occur when you are on a public Wi-Fi. For example, Man-in-the-Middle attacks are a form of eavesdropping which allows other users to capitalize on loopholes in the security of the public Wi-Fi. This way, any random person could end up reading all the data that you have sent.

‘Snooping and Sniffing’ is another common attack. This form of attack is quite similar to the one mentioned above, as people are able to access all your online activity for as long as you are connected to the same network. This is usually done with the help of special hardware and software designed to catch Wi-Fi signals.

A VPN is able to encrypt your data. ExpressVPN offers AES-256 encryption which is the same as the one used by banks to protect customer data all over the world. Using a VPN will mean that even if someone is able to intercept your data on a public Wi-Fi, they will not be able to access it since it will all be encrypted.

Once you are done setting up a VPN, you can stop worrying about spying and instead worry about attacks which could end up simply destroying your data. Whenever you are on a public Wi-Fi, there is a fair chance that you will download malware onto your system. You can stop any malware from causing harm to your files by using Anti-Virus/Malware software.

Anti-Virus software checks all of the files that are downloaded from the internet and performs regular scans into your PC/Mobile’s data directories to make sure no files are corrupt. In case there is a threat, you are promptly informed and then can decide what to do with that particular file.

We recommend you give Norton Security Suite a try. Likes ExpressVPN, Norton is at the top of its field and is the most reliable anti-virus software there is according to most experts. It has a lot of robust features and will protect all your devices including your computers, tablets, and phones.

How Anti-Virus software protects you

When you are on any Wi-Fi network, you are using software to interact with the router. There might be vulnerabilities in the software which those with malicious intent might exploit. If you connect to your personal Wi-Fi network, then you are probably safe since you trust all of the other people currently using the network.

However, a public Wi-Fi network is a completely different story. Since there could be any number of people connected to the network, it is entirely plausible that there might be someone trying to inject malware onto the computers of other users.

As we have stated above, Anti-Virus software will guarantee your safety through its constant monitoring of your files. Companies which manufacture such software have massive databases which are constantly being updated with new types of malware so as to ensure the safety of your data. Norton has one of the best databases in the world, which is why we recommend it.

Although it is best to avoid using public Wi-Fi networks, it might simply not be possible sometimes. In case you do need to use such a network, remember to follow both of the tips outlined above as they will protect you from a host of different kinds of attacks.

Although there are other ways through which you might be at risk when using public Wi-Fi, most of the protection against it is down to common sense (such as connecting to a network called McDaniels when at a Mcdonalds). Make sure you stay vigilant whenever using an untrusted network, and there shouldn’t be any problems on your end.

When To Use A Virtual Private Server

3 Reasons to invest in mixing and mastering