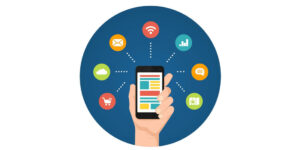 Whatever you want to do, chances are, there’s an app for it.

By 2022, there will be over 258 billion mobile app downloads worldwide. That’s over 34 app downloads for each human on earth in the year 2017.

Consumer demand has spurred app development at an astronomical scale. Anyone with a basic understanding of programming languages can come up with an idea for a simple app.

The hard part is building it, marketing it, and selling it.

Whether you already have an idea for an app or not, here’s how to bring an app to life in 9 steps:

1. Come Up with an Idea for an App

Most app developers come up with ideas organically. They recognize a problem, then dream up a solution to that problem. Game app developers often have a game idea stewing in their minds for months before they take the plunge.

For this reason, you shouldn’t spend a large chunk of your time learning how to build an app if you’re just doing it “to build an app.” Your app should relate to something you’re passionate about. After all, you’re going to be working on this product for a long time.

Start simple. Start with what you know.

For example, if you love cooking, your app could help people in the kitchen. Do you build motorcycles? How about an app that lets people custom-build their bikes on their smartphone?

The markets for the most obvious app categories (finances, time management, etc.) are overly saturated. You’ll need to find your own niche if you want to stand out.

Developing an app on your own is impossible if you don’t have some understanding of programming. That’s why so many web developers and coders venture into app development in their spare time. It’s fun and they already have the skills to do it.

If you want to build a complete web app, you’ll need to know one of the following programming languages:

If you’re building both the front and backend of your app, you’ll need to know database query language (SQL), as well. Of course, if you’re building a simple game, you may just need Lua or C#.

If you’re developing a native app, familiarize yourself with Swift/Objective-C (iPhone apps) and Java (Android apps).

These languages are the building blocks of your app. If you aren’t a developer but you still want to make an app, you could also rely on an App Maker for help.

You should also look at the marketplace. Has someone already come up with the same idea?

If so, it doesn’t mean you have to abandon your app. Look at what your competitors are doing and see if you can do it better.

Nonetheless, keep this in mind: The Google Play app store hosted over 2.1 million apps as of 3rd quarter 2018. By 2020, the iPhone app store will host 5 million apps.

If you’re thinking about building a smartphone app, you’re entering an already crowded marketplace. Do everything you can to stand out.

At this point, you should have a clear understanding of what your app is going to do.

Create a long list of functionalities. Erase the ones that don’t add value to the app.

What does your app really need? Will your users need to log in and create a profile?

Your user interface (UI) flow is a diagram that shows how users will interact with your app. Most app developers start with rough sketches, then refine their UI over time.

Flowcharts are often the best way to create this type of diagram. By the end, you should have a good idea of how a user will use your app from beginning to end.

Depending on the type of app your building, you may not need a database. But if you need to save any kind of user information, like log-in credentials, you’ll need to store it somewhere.

Draw a diagram to map the relationships between every data type. Be sure to include any future features in your database plan. It will be easier to roll them out if you’ve already made space for them.

Again, depending on your app, you may need a more advanced database diagram. For example, an app that interacts with an API and pulls data from somewhere else will be more complex than a simple platforming game.

Remember the sketches you made in #5? Now is the time to fully flesh them out.

Your user experience (UX) wireframes will serve as the scaffolding for the front end of your app. In other words, they are what your users will see and interact with.

When it comes time to code, you’ll watch as these wireframes become living components of your app.

If you’re a designer, you can also design your user interface. You’ll have to make choices about color, font, art, images, graphics, buttons, and more elements. If this isn’t your forte, you can always work with a professional designer.

Don’t stress too much about how your app looks. It’s your app’s functionality that will make or break it.

Before you start, remember that you don’t have to do everything from scratch. There may be existing solutions you can use to save yourself time (and headaches).

Ultimately, it’ll be up to you to decide what you need to code yourself and what you can import from elsewhere.

You should also make use of any tools at your disposal. There are myriad programs and service providers that can help you jump-start your app.

Before launching your app, you’ll need to run some user tests to identify bugs. You’ll keep doing this after launch, as well.

This is often the most stressful point in app development. You’re about to find out whether your app’s functionalities work and whether people want to use them.

But don’t expect your app to be perfect from the start. Even the simplest, most mature apps still have bugs. Yours will too; it’s how you respond to them that counts.

Launch Your Next App Idea

You started with an idea for an app, and now you’re ready to launch. Whether you’re launching an app as a business venture or doing it just for fun, you’ll need people to download it.

Check out the Startups section at TGDaily.com for more info on marketing and building an app business. Who knows? Maybe your app will be the next industry disrupter.