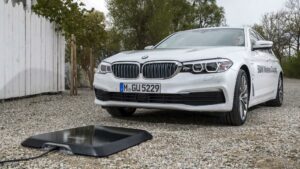 Well sort of, the iPhone uses a relatively old inductive technology that requires almost direct contact but the car companies will be using technology from Qualcomm or WiTricity (in some cases a blend of both) which uses resonance. The difference is that you don’t need contact you just need proximity. This could significantly reduce one of the annoying problems with the current generation of wireless cars, folks forgetting to plug them in when they get home and then not having enough charge to get to work the next morning.

Likely slated to be a must have item on an electric or electric first hybrid (where the car also has an engine to charge the batteries) this technology will begin the process of eliminating the biggest problems with electric cars; running out of power.

The two most active providers of this technology are Qualcomm and WiTricity. While both technical solutions work similarly they aren’t interchangeable yet which will limit the adoption of this technology on streets and in parking garages. However, the most common initial implementation will be in the home and you’ll most likely buy the solution from you dealer who will either install it for you or hook you up with someone that will.

So far, the car companies I know for sure are going to have this as options are BMW, Jaguar (for their electric iPace), and Mercedes (BMW and Mercedes announced this week) who appears to be using their own unique flavor of this technology.

Right now, the sweet spot for electric cars are as a second vehicle and for folks that have relatively short commutes particularly in heavy traffic. They are far less useful for long trips, or long commutes particularly at high speeds. Unlike gas cars, electrics are better the slower you travel and aren’t that much less efficient in stop and go driving. But, at range, you are looking for a charger, chargers aren’t yet anywhere near as easy to find as gas stations, and it can take hours to fully charge a full electric from most charging stations (the Tesla superchargers being an exception).

This means that most folks that buy in this sweet spot charge their cars at home rather than on the road and currently their biggest problem is forgetting to plug the car in.

As noted above, resonance charging just requires proximity and that means all you have to do is park over the sender and your car will automatically charge. This is likely most handy for people that have filled their garages with crap and have to park outside because no one wants to mess with a high-powered charging cradle in the show or rain. But given how often electric car owners forget to charge their cars, this will also provide critical peace of mind for those that use their garage as intended.

The long-term promise of this technology is to imbed it into roads, particularly interstates, so you can use your electric cars more conveniently than gas cars. Though getting a husband to make a bathroom stop could become even more difficult.

And eventually having this technology in public and private garages and metered parking places would reduce concerns about running out of power significantly but these all will have to wait until we have a common standard and a critical mass of cars using it which likely won’t happen until 2030.

Still, just having it in the garage would be a huge step forward for most electric car owners and I’m kind of surprised Tesla (given they are named after the father of wireless power) hasn’t implemented this already since the technical challenges are far less than the robotic charging arm they have under development (though I do have to admit that charging arm is really cool).

There are basically two big problems plaguing electric cars now. Battery capacity and ease of charging and they are exacerbating each other. With longer battery life, we wouldn’t need to worry about charging so much and with more fast chargers we wouldn’t have to worry about running out of power as much. Currently the biggest fear for a potential and existing electric car owner is running out of electricity. Resonance charging will help a lot regarding making charging easier but we’ll likely still need better batteries before electrics cars can fully step up and reach their true potential.