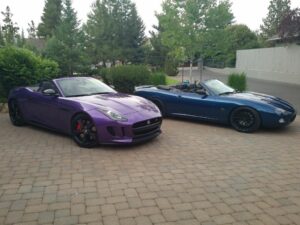 I have a 2014 F-Type and it remains one of the most fun cars to drive I’ve ever owned. However, it is far from perfect in that it is heavier than it really should be, has no trunk, and the complaints about the sound system are legion. Mostly rattles, poor sound performance, and slow response times. This is far from uncommon because car companies in general have a 3 to 5-year development cycle and put a system into the cycle that may be from the prior version of the car. That is why these systems lag their consumer market counterparts so badly. And, sadly, they have gone away from standard sizes so you can’t update most of them anymore with over the counter replacements both because of a lack of space and because many of the car’s functions are only available through the screen.

However, I was just watching a video for the new Jaguar F-Type ReRun app which was created through a partnership between GoPro and Jaguar. It shows where the car companies should be going but doesn’t go far enough. Let me explain.

What ReRun does is it links the car’s sensors to the phone and then syncs them with the GoPro camera. Placing the camera on your hood or behind your windshield then allows the app to generate a video that shows the drivers view, your throttle position, speed, gear, lateral Gs, steering wheel position, RPM, and brake pressure. At the end, you basically get an instructional video of just what happened on the track and used in conjunction with either an instructor or other drivers you could compare videos after a track run to see exactly why you are getting your butt kicked but only if the other folks are driving your car or a similar car.

It is an amazing piece of tech but it doesn’t go far enough.

An app like this should be car independent and it certainly could be. This is because, particularly with a relatively small run car like an F-Type, there may not be anyone else at the track with you that has one, or if they do, the same type and year you have. Apparently, this only works with the latest Jaguar F-Type and nothing else. Having used tools like this myself much of the value is in being able to see the delta between how you are driving verses someone that has turned in a better time and without that you are likely going to have to hand your new car over to that better driver and hope they don’t crash it while setting your goal speed.

This app also shows that there is more advanced technology in your phone then in your new car and that this performance delta will only increase as your car ages. Increasingly we are getting our music and navigation off our phones anyway along with all our communication so it really makes more sense to connect the car more deeply with the phone and then simply have the phone feed the car’s amplifier and screen. That way you can update the phone’s apps and effectively update what you can do in your car at the same time. Apple’s Car Play and Google’s Android Auto tend to do this but, as of this writing, neither will link yet to the car’s telemetry to do what ReRun does. Now there are separate apps that will do this, Road & Track lists some here, but they don’t integrate with Car Play or Android Auto so you are stuck using your phone screen (unless you can pull the signal out) and it is one or the other thing making managing your tunes problematic (I like music on the track).

Wrapping Up: Embracing The Smartphone

To fix this and create experiences that advance with the technology I believe that future cars should simply lose AV intelligence and shift that responsibility to the Smartphone entirely. Displays in the car should pull off the Smartphone screen and car telemetry should feed into the Smartphone more reliably. Apps like CarPlay and Android Auto should increase their feature set to this Telemetry information and make full use of the more advanced Smartphone platform. You then get feature updates with your new phone and apps, you can take those updates and features to every new car you drive, and when doing a track day, you’ll be able to compare how you drove with the other drivers more reliably.

I think that is where the market will eventually go, I just wonder how long it will take for the major players to get us there. BlackBerry, Qualcomm, and NVIDIA are all in the hunt as are Apple and Google but the car companies seem to be still living in last century suggesting it’ll likely take one of the next generation companies out of China or Tesla to get this right first. We’ll see.

Does a College Education Pay Off

What are the best hockey skates?