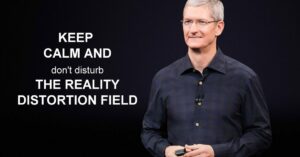 Steve Jobs was a natural manipulator, so much so that folks often referred to him as having his own Reality Distortion Field.  This allowed him to say often even contradict himself and get away with it.  For instance he once said that video on an iPod was stupid and that no one would ever adapt a tablet because it lacked a keyboard (there is a list of his 6 most impressive false statements here).

One effort that really screwed up the PC market for a while was his forced march to the ultimate thin Notebook Computer the MacBook Air.  It was a lust worthy device, but the tradeoffs were painful, so much so that Lenovo made fun of it in this video.

Why The MacBook Air Sort Of Sucked

Now I’m sure a lot of folks legitimately liked the MacBook Air, but I’ve known several that quickly learned they couldn’t live with it.  It was simply the wrong product for them and yet they were convinced by some impressive marketing that it was a “Magical” product only to find it was instead a bad buy.

At an event last week I listed to Dell talk about why it was better to cut down on x/y (width and depth) dimensions than z (height) dimensions because the result would fit more easily into backpacks, you didn’t have to use dongles (which I regularly lose), the keyboard isn’t compromised (keys aren’t limited in movement), you can more easily/efficiently cool the device, there is less risk of compromising catastrophically the battery (battery fires are bad as we saw with the over thin Samsung Note 7), you use less desk space and you can use types of battery that have longer life (gel batteries are thinner but you give up some battery life with the design and it can be harder to swap them out as they age).

After Dell was done I struggled with why you would trade off to buy something like the MacBook Air and most I knew, after the fact, appeared to like the regular MacBook better.

But I get how a good ad campaign and particularly a great manipulator can get you do buy something that you otherwise wouldn’t.,

How I Was Fooled

Now this isn’t just about laptops and I’m also not saying I’m not gullible myself.  For instance I once bought a “Le Black Cat” Mercury Capri based on a Ford ad (you can find one of the original ads here near the bottom) which had me thinking it was a poor man’s Aston Martin, it wasn’t, it was a waste of money.   (Though it was pretty, it was underpowered, unreliable, and it didn’t even handle that well).

So, I get it, it is really easy to get excited about the promise of a new product and lose track of reality and a car is a ton more expense than a Laptop.

This is Mad Men level marketing and it is very effective, it can get you to buy stuff you otherwise wouldn’t even consider and if the company doesn’t assure the experience it can loser a buyer.  Apple did a better job assuring the experience than Ford did.  My proof is that Apple still reports one of the highest customer loyalty scores while car companies tend to lag that score significantly.  For instance, it was nearly two decades before I would even consider a Ford again after buying that car.

Most of the folks I knew that hated the MacBook Air just switched to another MacBook.

Wrapping Up:  How To Keep From Being Fooled

You have to step away from the emotion of a product and what the advertiser or sales person tells you that you want and focus on what your actual needs are.  It is best to write those elements down and refer to that list often while choosing whether the product is for you.

In the case of a laptop most tend to rank price, battery life, performance, and low weight highly and the MacBook Air really is only competitive on the weight category (though a far lower cost version of that product is rumored to be due shortly).  For most the MacBook Pro is likely the better choice in the Apple line and, typically, the Dell XPS 13 ranks higher.  But if you are MacOS fan the Dell likely doesn’t even make your list.

In the end I think Dell was right, thinner isn’t really as important as battery life, performance, usability, or even desktop real estate.  And we certainly found that in that Samsung Galaxy 7, that Thin and on Fire wasn’t as good as just a tad thicker and no fire.   Just saying…

Technical Scuba Diving: What Is Trimix