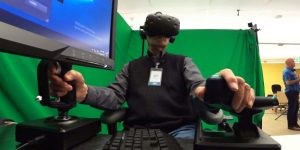 which hasn’t been selling well) share my frustration. Intel, this week, released a video of a 100 year old WWII vet and fighter pilot, who also taught flight, and was a flight controller. They put him on an HTC Vive rig and had him go to town. In all cases he was seated and the most interesting was him doing a flight simulator with full flight controls. He seemed sold but largely because they focused on what VR can do well now and not on the blue-sky crap that you typically see with VR.

I think this is a learning moment, let me explain.

I think we have a Holodeck envy problem. When we more typically talk about VR we reference the

Star Trek Next Generation Holodeck which, admittedly, is a nice target. But that fictional technology just required the users to change costumes and walk into a room to enter a virtual world. No controllers (the computer interface was voice), no bulky headsets, and the ability to walk in any direction for any length of time and not hit a wall or other object that wasn’t in the simulation. That’s great and we are decades way from an experience like this. It simply sets too high a bar and when we give folks today’s technology they are understandably very disappointed.

Right now, we don’t have a good way to emulate walking. We’ve experimented with 2D treadmills and huge orbs that we can walk in or on and all of that has not only been relatively expensive, it has also been very impractical often requiring a level of balance common only in some acrobats. In addition, we have the headsets which are extremely unattractive, heavy, and can through off a person’s balance. And, finally, we’ve had the tethers and the lack of dedicated rooms making moving around, even in a limited fashion, masochistic at best, and a great source of videos making fun of folks using the gear.

Intel did demonstrate you could get rid of the tether with WiGig but not the rest of the problem.

Intel put the guy in a chair. Seated all the movement problems go away and it focuses you on content that can be used while seated and there is a lot of it. You have visual tours and you can do seated emulations, for that 100-year-old pilot that clearly included flying planes, something he likely is no longer able to do in the real world. With a stick and a throttle, he could revisit the experience of flying far safer than Harrison Ford was, for both Ford and those of us on the ground, in a real plane and still have much of the same level of experience. He could even revisit being a fighter pilot, something that would be beyond most folks’ half his age.

The result wasn’t disappointment, it was excitement and, I expect, he either bought or (I hope) was given a VR headset and PC to continue to enjoy the kind of experience that he had at Intel.

One thing I did notice and that was he had a keyboard between the controllers for the flight emulation which is common with a monitor driven experience but problematic with a VR experience because you can’t see the actual keyboard and you don’t put PC keyboard’s in planes so it does detract from immersion. This suggests we do need to continue to ramp up the concept of a conversational PC interface like Cortana and, like when Microsoft moved from Windows as an overlay to Windows as an integrated experience with Windows 95, move conversational voice control in as a primary interface if we really want this to take off.

To make VR successful we need to get people excited about what it can do today and stop showcasing what it might be able to do in 30 or so years. I would add that we seriously need to rethink the headsets so they are more attractive and one way to do that would be to build them into helmets which would improve immersion in many driving, flying, and space simulations and make the technology users look less foolish in the process. I think Intel’s showcase made a huge step into showing us how VR should be showcased but I also think we could go much further with today’s technology to create excitement and build this segment than we are. The question is, who is going to truly make an Apple like effort to bring VR, we call it Mixed Reality now, into the mainstream.