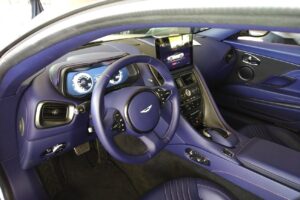 I’m at a BlackBerry analyst event this week and one of the highlights is their connected car update. They had both a new DB11 Aston Martin and a Range Rover showcasing a blended solution using Intel hardware and BlackBerry (QNX) software. Of course, being a car guy, I couldn’t help but go over the DB11 and checking it out. Like most Aston Martins the car is rolling art but, typically, the internal technology seems years out of date. BlackBerry and Intel worked together to update the car, and this often makes me wonder why these updates aren’t offered as a service. A common complaint from all of us who have bought high end cars is the outdated navigation and infotainment systems that age badly over time and require you to buy a new car to update. I know a lot of us would kill to have the option of doing to our cars what BlackBerry and Intel did to the Range Rover and Aston Martin.

Let’s talk about some of the cool tech I’m lusting for in these cars.

The stock DB11 is surprisingly up to date for a car known for being years behind its peers in terms of technology. It uses a multi-screen approach for the main binnacle but, while it looks good, and a ton more up to date than the old analog gauges, it limits dramatically the fixability of the display. BlackBerry and Intel swapped the multi-screens for one big screen that can then be dynamically changed depending on what you want to do.

For instance, if you want you can move the navigation, music album cover pictures, back up camera, or trip information to the binnacle keeping your eyes more focused forward rather than to the side and the secondary display. The stock DB11 display is relatively small, very counter to the trend that Tesla started with their amazing large central display and it is also fairly limited. BlackBerry and Intel significantly increased the display size and added full functionality similar to the Tesla. Using an Android implementation, they integrated voice control and allow most operating entertainment and HVAC controls to operate on the display.

Now the DB11 is more of a GT than a sports car. But the focus of the implementation was consistent with the goals for the car, enhancing distance driving and providing entertainment.

The Range Rover was also a blend of Intel hardware and BlackBerry software and services. Like the Aston Martin they took over the driver binnacle, but Range Rover has already moved to a larger screen (as has Jaguar) for their latest models and they just used what was there. But because Range Rover, unlike most other SUV makers, is serious about off road driving the functions presented are very different.

The Range Rover has a number of unique settings the driver can use to better handle the variety of off road driving that an owner might experience. (I say “might” because few folks that buy any SUV actually take it off road). One of the issues is there are a lot of settings to learn. Well with the BlackBerry Intel upgrade these features were displayed on the driver’s binnacle and seemed to auto select based on terrain and geo positioning. This potentially makes what otherwise might be a daunting set of settings for that first-time off-road experience into something that is far less daunting and the drive far safer.

In both cases the implementation was well integrated into the vehicles and the control systems were isolated and secured from the entertainment systems. This is important because not being isolated and secured is what forced a Jeep recall a few years back. So, the implantation isn’t just compelling it is secure.

I’m into an expensive hobby called resto-mods and my community would kill for what BlackBerry and Intel did to these two cars. As I noted above, one of the most common complaints in new car forums is that as the current generation of cars age owners can’t update their entertainment and dash systems like were done here. Tesla is really the only firm I follow that aggressively has programs to update cars they have already sold and, it would seem, this could be a decent secondary revenue stream for dealers if it were it done properly.

In any case what BlackBerry showcased is a view into the near-term future of connected cars. Better, bigger, displays and an active driver binnacle both secure from attackers and each other while providing a more intuitive, safer, and less frustrating driving experience.

Now if I could just get to this without having to buy a new car.