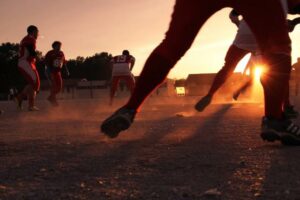 Virtual reality (VR) has become quite a hot topic over the last year—a lot of parties are interested in creating simulated worlds for the masses to explore with specialized VR headsets. Even big companies like Disney and Comcast are currently investing in VR, hoping to get a jump on this burgeoning market. Everything from how we shop to how we watch YouTube videos is being slowly taken over by virtual reality.

Now, 360-degree video tech is making its way into the world of athletics. But how will the industry be impacted as virtual reality plays a bigger role in the sports experience? We’ve got a few ideas.

Virtual reality has the potential to make training safer and more effective for athletes. Because technology has advanced enough to blur the line between VR and reality, athletes can now supplement their training without having to plan their schedule around the weather or worry about possible injuries. That’s a huge benefit, as it allows athletes to run the plays they need to practice without jeopardizing their ability to play in future games.

Strategy makes up a big portion of nearly every sport, too, and VR tech also allows players to refine the strategic details of their gameplay at any time and with greater precision. Stanford University has already added virtual reality training to its football team’s arsenal, allowing players to reduce their practice time while increasing the overall quality of their training.

Referees already have a hard enough time trying to determine what was and wasn’t fair in the age of multiple camera angles and slow-motion replay. Virtual reality could take that to the next level, giving officials a range of new angles to observe and call. And while that might make for better results down the line, it’s definitely going to take a bit of adjustment.

At the other end of the spectrum, VR can also help fans better understand how hard it is to make a call as a referee. For example, at a rugby event earlier this year, a few fans got to try out a referee-perspective VR experience where they were shown game clips and asked to make tricky calls. For many, playing the part of official was easier said than done. Expansion of these kinds of VR experiences could mean less criticism towards game officials, going forward.

For fans, virtual reality has the potential to make courtside seats at basketball games affordable for the everyday viewer. Samsung, for instance, has already created headsets that make 3D game-viewing a reality, and the company used them successfully in the world’s first virtual reality broadcast of a Portuguese football game. The technology isn’t perfect yet, but being able to watch a game as if you’re in the middle of the action will make the fan experience more enjoyable for those who would otherwise be watching on their 2D television screens.

Virtual reality may also allow fans to connect with each other better than ever before. Friends, family members, and even strangers living far away from each other could have the ability to watch a game together as if they’re experiencing it live and in-person.

There’s little doubt that VR technology is on track to change the sports experience for fans, athletes, and officials alike. And while the costs for top-of-the-line VR headsets might still be prohibitive for some, they’re certain to be brought down a few notches as demand increases. We may soon see a time when everyone has their own VR headset and the ability to watch a game as if they’re at the stadium or field in person.

As for how these advances will affect annual Super Bowl parties? For that, we’ll have to wait and see.