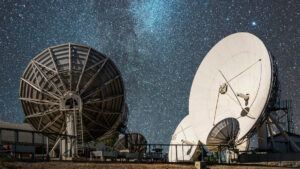 The Search for Extraterrestrial Intelligence (SETI) has spent millions and sacrificed decades scanning the the vast expanse of the heavens above for potential communication from aliens and if latest reports are to be believed they might have just stumbled upon a signal sent from outer space.

An international team of SETI scientists in Russia has picked up mysterious signal spikes emitting from a 6.3-billion-year-old star in the constellation Hercules — 95 light years away from Earth. The implications of this finding are extraordinary and could point to the possibility of an alien civilisation in the deep trenches of outer space.

The star’s designation is HD164595, and is considered to be like our own sun in nature. Scientists so far have detected one Neptune-like planet in its orbit, which is too close to the star for habitable life, but it is believed there could be other, smaller planets that have yet to be detected in the star’s solar system.

However, the scientific community is taking it slow and refraining from making any premature claims before completing a thorough analysis of the tracked signal which was picked up last year by RATAN-600 radio telescope in Zelenchukskaya in Russia, but is only being made public now.

Speaking to the Verge, Seth Shostak, the director for the Center for SETI Research, has cautioned against jumping to conclusions of existence of intelligent life. He points out that there could be possible explanations for the tracked signal, and until a repeat signal is picked up scientists can’t be sure of the origins of the signal.

Many Claim The Signal Could be From an Advanced Civilisation

Even though experts agree that it is far too early to know what the signal means or where it precisely came from, but many voices from the community claim this could turn out to be one of the more exciting finds of modern history.

Paul Gilster referring to a scale-system that indicates a civilisation far more advanced than our own.

The signal is provocative enough that the RATAN-600 researchers are calling for permanent monitoring of this target… Working out the strength of the signal, the researchers say that if it came from an isotropic beacon, it would be of a power possible only for a Kardashev Type II civilization… If it were a narrow beam signal focused on our Solar System, it would be of a power available to a Kardashev Type I civilisation.

The English Have Done It, a ‘Flying Car’