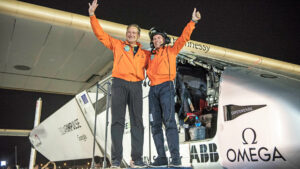 The world’s first round-the-world flight to be powered solely by the sun’s energy made history as it landed in Abu Dhabi on Tuesday, where it first took off on an epic 40,000 kilometre journey that began more than a year ago.

Since its March 2015 take off, the Swiss-engineered Solar Impulse 2 has made 16 stops across the world without using a drop of fuel to demonstrate that using the plane’s clean technologies on the ground can halve the world’s energy consumption, save natural resources and improve quality of life.

The experimental solar-powered airplane is seen after landing in Cairo, Egypt on 13 July 2016. (Photo: AP)

“Our mission now is to continue to motivate people, corporations and governments to use these same solutions on the ground wherever they make sense,” Solar Impulse chairman and pilot, Bertrand Piccard, said in a statement ahead of landing the plane in Abu Dhabi.

The aircraft is uniquely powered by 17,248 solar cells that transfer energy to four electrical motors that power the plane’s propellers. It runs on four lithium polymer batteries at night. The plane’s wingspan stretches 236 feet (72 meters) to catch the sun’s energy.

At around 2,300 kilograms, the plane weighs about as much as a minivan or mid-sized truck. An empty Boeing 747, in comparison, weighs 180,000 kilograms. To help steady it during takeoffs and landings, the plane was guided by runners and bicyclists.

The pilots faced a nine-month delay a year ago after the plane’s batteries were damaged during a flight from Japan to Hawaii. It was also delayed for more than a week in Cairo ahead of its final flight to Abu Dhabi when Piccard fell ill, and due to poor weather conditions.

Over its entire mission, Solar Impulse 2 completed more than 500 flight hours, cruising at an average speed of between 45 km/h and 90 km/h.It made stops in Oman, India, Myanmar, China, Japan, the US, Spain, Italy, Egypt and the United Arab Emirates. Its North American stops included California, Arizona, Oklahoma, Ohio, Pennsylvania and New York.

In a statement this week, Borschberg said it is no longer a question of whether it’s possible to fly without fuel or polluting emissions.“By flying around the world thanks to renewable energy and clean technologies, we have demonstrated that we can now make our world more energy efficient,” he said.

(With inputs from PTI)

Nokia Planning to Come Back With a Bang