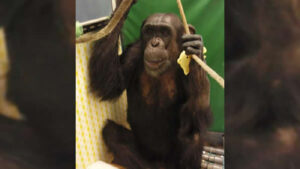 Reo, a male chimpanzee, was 24 years old when he suddenly became paralysed after a portion of his spinal cord became inflamed. The chimp was given intensive physiotherapy sessions for 41 months, but there wasn’t any significant improvement.

It was then that Japanese researchers decided to deploy technology to get him to walk again.

They managed to rehabilitate the paralysed chimpanzee through interactions with computers and touch screens.

The case was described in an article in Primates, the official journal of the Japan Monkey Centre published by Springer.

Researchers of the Primate Research Institute at Kyoto University have previously been doing research around chimpanzees’ interaction with computers and touch screens to study the cognition and perception of the animals.

When Reo was found to be paralysed, the scientists put the technology to use again. This time, it was to help him walk, and they incorporated computerised tasks in the mission to rehabilitate him.

The option was both doable and viable because in his youth Reo had learnt how to perform cognitive tasks on a touch panel.

A computer-controlled monitor wasplaced on one wall, and cognitive tasks were put to him. These tasks gradually encouraged him to increase his movements and eventually, he started walking up to five hundred metres in a two-hour session.

Reo’s example is also indicative of how euthanasia does not have to be the only option for injured animals.

Hands On The $4 Freedom 251 Smartphone

Does Your SEO Company Offer The Promised Quality?