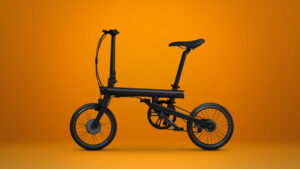 Phones, air purifiers, rice cooker, powerbank and flying drones. That’s Xiaomi in a nutshell for you. And now, the China-based brand is venturing into the eco-friendly territory with its first-ever electric foldable urban commuter cycle called QiCycle.

The QiCycle is made of carbon fibre, loaded with sensors and weighs a meagre 7 kg.

You can fold and carry the Xiaomi QiCycle. (Photo Courtesy: MIUI)

Smartness is the mantra for QiCycle. (Photo Courtesy: MIUI)

This urban commuter is powered by a Panasonic 18650 mAh battery, and as per the company can cycle up to 45 km on a single charge.

In addition, the QiCycle comes equipped with a bike computer so that users can track calories burned, distance traveled, speed at which they’re moving etc.

Asus ZenFone Max Review: A Lot of Powerbank in a Phone

Here Is How to Impress Potential Investors Beyond Just ROI