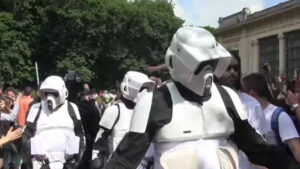 Star Wars storm troopers paraded around the WOW Comics Space in Milan, Sunday, as part of the “Star Wars: From comics to the movies … and back” show.

The Star Wars parade was organised by WOW Comics Space alongside the 501st Italica Garrison Legion and Rebel Legion Italian Base fan clubs.

Don’t wait for the police: plugging holes in your website forms to avoid SQL injection