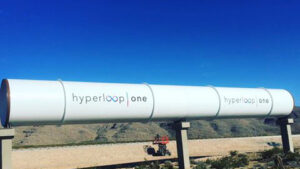 A car-sized sled powered by electromagnets rocketed to more than 100 miles (160 kmph) an hour through the Nevada desert on Wednesday. It was the first successful test of a futurist transit system called Hyperloop, a technology being developed by the Los Angeles company.

Hyperloop One is among several companies competing to bring to life a technical vision by Elon Musk, the founder of rocket maker SpaceX and electric car company Tesla Motors, who suggested sending pods holding passengers and cargo inside giant vacuum tubes between Los Angeles and San Francisco.

It’s a matter of debate how soon – or whether – passengers and cargo will ride the system at velocities approaching 750 miles per hour (1,200 kph), but Hyperloop One already has raised $80 million from backers including clean technology venture capitalist Khosla Ventures; high-speed railway SNCF, the French National Rail Company; and GE Ventures.

Brogan BamBrogan, a former SpaceX engineer who co-founded Hyperloop One, called the test a major milestone.

“Technology development testing can be a tricky beast,” he said to a crowd of 300. “You never know on a given day if things are going to work exactly like you want.”

The sled began on a train track and was then rocketed to 105 miles per hour by electromagnets as electricity was shot into copper coils. After a short ride, the sled ran into a sand trap, sending out silicon sprays. If all goes according to plan, sleds will levitate and carry pods in a test later this year. Gigantic tubes already are scattered around the Las Vegas area test site.

Company Chief Executive Rob Lloyd on Wednesday forecast a hyperloop would transport cargo by 2019 and passengers by 2021.