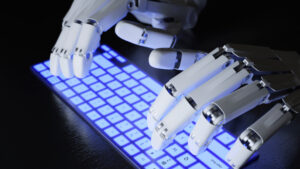 When Microsoft recently unveiled its AI (artificial intelligence) powered bot on Twitter for a playful chat with its audience in March, little did the tech giant know that the Twitterati would begin slamming the innocent bot with racist and offensive comments.

Launched as an experiment in “conversational understanding” and to engage people through “casual and playful conversation”, Tay was soon taken off Twitter by Microsoft engineers.

This was a soft experiment, but what if you can interact with a “chatbot” and send the AI-powered machine your financial requirements like you would text your banker or chartered accountant in the near future?

Facebook wants this to happen and at its F8 global developer conference in April, the social networking giant unveiled AI bots right into its popular messaging app, Messenger, allowing 900 million monthly active users on Messenger to interact with businesses and get updates from them.

Facebook CEO Mark ZuckerbergWe think you should be able to text message a business like you would send to a friend and get a quick response.

Sounds fancy, but are chatbots the future of online businesses?

Digital is entering a new era where technology takes on human qualities. Examples of driverless cars, voice-activated homes and AI-powered chatbots fill our minds with joy, admiration and anticipation.

Tamara Gaffney, Principal Analyst, Adobe Digital IndexChatbots as a concept is going to evolve and become meaningful. They will create more opportunities for new companies to explode from nothing into prominence. They will create many new business strategy opportunities. In my opinion, they will play a large role in online business but not every role. We as humans are still very visual beings so I see them [chatbots] as part of the digital experience.

According to Facebook, there are over 50 million businesses on Messenger and the company is aiming to provide great valuable experiences for users and added value for businesses. Facebook has released a set of tools to allow software developers to create chatbots for the Messenger in partnership with businesses.

Chatbots have already been incorporated in some popular messaging services such as China’s Wechat. Tech giants like Microsoft and Google are also working to bring this technology to their platforms.

(Nishant Arora can be contacted at nishant.a@ians.in. This article is published in arrangement with IANS.)