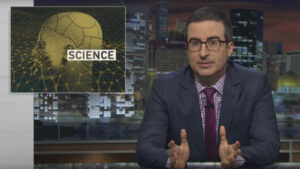 “A new study shows that drinking a glass of red wine is just as good as spending an hour at the gym.”

Sounds too good to be true? Well, as John Oliver puts it, “It’s more like something your sassy aunt would wear on her T-shirt.”

John Oliver, on his TV show Last Week Tonight, ripped into the media’s oversimplification of scientific research. Television news’ equivalent of click-baiting is to present the simplest possible form of a scientific argument to its viewers. But as an actor in Oliver’s spoof points out:

Science is a very slow and rigorous process that does not lend itself easily to sweeping conclusions.

Aside from the media, he also called out research that is biased because of lack of rigour or the source of funding, as well as the pressure on scientists to publish ‘interesting’ results instead of pursuing replications of experiments.

The audience wasn’t spared either. He pointed out that TV news, and all other news sources for that matter, take into consideration what their target audience wants to see and then give them exactly that.

So, we’re basically getting what we ask for and, more often than not, what we’re asking for seems to be different ways in which everything causes and also cures cancer.