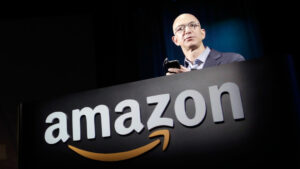 Shares of Amazon.com surged on Thursday after the e-commerce powerhouse reported better-than-expected first-quarter results fuelled by a 28 percent jump in revenue.

The Seattle-based company’s net income totalled $513 million, or $1.07 per share, compared with a loss in the same period a year earlier. The average estimate of 14 analysts surveyed by Zacks Investment Research was for earnings of 61 cents per share.

In a statement, CEO Jeff Bezos said sales of Amazon devices such as the Echo smart speaker and the Fire TV stick were strong, although the company does not break out specific sales figures.

For the current quarter ending in July, Amazon said it expects revenue in the range of $28 billion to $30.5 billion. Analysts surveyed by Zacks had expected revenue of $28.14 billion.

Amazon shares jumped $75.50, or 12 percent, to $677.50 in extended trading following the release of the earnings report.

Through the close of regular-session trading Thursday, the company’s stock was down 11 percent since the beginning of the year, while the Standard & Poor’s 500 index has climbed almost 2 percent.