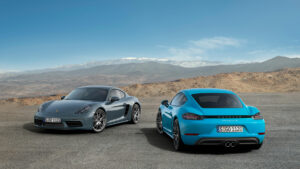 The original 718 was an open-cockpit racing car built by Porsche between 1957 and 1962 and won many races for the company, including the 24-hour Le Mans and Targa Florio.

The German automobile manufacturer decided to bring back the legendary ‘718’ tag with the introduction of the Boxster 718 a few months ago. Now, the Cayman too has got the 718 treatment, which includes tweaks to the chassis, Porsche’s new four-cylinder turbocharged engine, and styling updates.

The 718 Cayman is powered by a 2-litre engine that puts out 296 horsepower while the Cayman S gets a 2.5-litre engine that can put out 345 horsepower, both of which have a 25 horsepower bump over the cars they replace. These cars available with a six-speed manual or seven-speed Porsche Doppelkupplung (PDK) transmission.

Porsche 718 Cayman from the back. (Photo: Porsche)

The car has 4 driving modes – Normal, Individual, Sport and Sport Plus, which alter steering sensitivity, suspension dampening, and throttle response according to the mode set.

On the inside, the new 718 is fitted with Porsche Communication Management (PCM) with 7-inch infotainment screen and optional navigation module.

The new 718 then has all the ingredients for a new Porsche, but giving it the 718 tag might not go down well with a lot of Porsche purists. The Cayman for the first time will be cheaper than the convertible (Boxster) sibling as well.

Love it or hate it, the car brings the digits 718 back on our roods and we have no complaints.