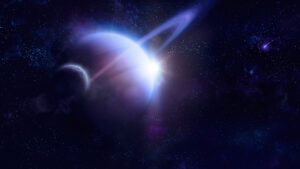 NASA scientists have proposed deploying a robotic system to explore the exotic environment that is the subsurface oceans of Saturn’s icy moons that may potentially harbour life.

Several concepts have already been studied to explore the subsurface oceans of Europa and Enceladus using autonomous underwater vehicles (AUVs).However, access to subsurface ocean remains to be an outstanding challenge, researchers said.

The proposed concept is to deploy a surface-to-subsurface robotic system, namely Icy-moon Cryovolcano Explorer (ICE). The robot will land on the surface of an icy moon, traverse to a cryovolcano, descend into its opening, perform in-situ science in the vent or crevasse, and ultimately deploy underwater vehicles to explore a subsurface ocean.

DM carries AUVs and descends into a vent by using a combination of roving, climbing, rappelling, and hopping, like an experienced human alpinist. The estimated gas density of an ejecting plume is sufficiently low, therefore, its dynamic pressure would not be an obstacle for descent.

SM stays on the surface, generates power by radioisotope thermo-electric generator (RTG) and solar cells, and communicates with Earth. DM relies on the power and communication link provided by SM through a cable to minimise the size and weight. It is a highly autonomous agent being capable of quickly responding to a dynamically changing environment.

Once DM reaches the subsurface ocean, it launches the AUVs to explore the exotic environment that potentially harbours life.

ICE Capable to Examine Even Subsurface Oceans of Saturn’s Moons

ICE brings three unique benefits. First, it enables in-situ science in a cryovolcano vent. Although orbiters can perform in-situ science of plumes, relatively large dust grains are hard to reach orbital altitude. Yet it is those mineral grains that carry rich information about the habitability of the subsurface ocean.

Since water blocks radio waves, communication and localisation are particularly significant challenges for AUVs. DM of ICE communicates with AUVs though acoustic communication. DM then transfers the data though an optic cable to SM, from which the data is transmitted to Earth by radio.

DM also sends an acoustic localisation beacon and serves as a battery charging station, potentially not warranting RTG on the AUV.

We will develop mission concepts for ICE, identify the primary risks associated with the mission, identify potential mitigation for these risks, and perform a feasibility analysis for the mission.

BMW Is Redefining The Future. Prepare To Get Blown Away!