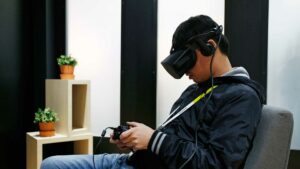 An executive from the virtual reality (VR) company Oculus says consumers shouldn’t be concerned about an invasion of their privacy when using the Oculus Rift.

It’s a new medium. People want to know. They have a right to ask. We’ll answer. It’ll be fine.

Senator Al Franken wrote an open letter to Oculus CEO Brendan Iribe earlier this month asking for details about user data collected by the new VR system, which is worn on users’ heads and can detect movement, location and sound.

“Oculus’ creation of an immersive virtual reality experience is an exciting development, but it remains important to understand the extent to which Oculus may be collecting Americans’ personal information, including sensitive location data, and sharing that information with third parties,” he wrote.

Franken is asking for more information about how the Facebook-owned company is handling data collected from users. He noted in his 7 April letter to Oculus that:

The collection, storage and sharing of personal information may enhance consumers’ virtual reality experience, but we must ensure that Americans’ very sensitive information is protected.

Franken asked Oculus to respond by 13 May. Rubin declined to specify when Oculus would address the questions.

“We’re going to answer all of that in due time,” said Rubin, a video game industry veteran who joined Oculus in 2014. “We’re absolutely confident that people are going to say, ‘Oh. Yeah. Right.’”

The Oculus Rift began shipping to consumers on 28 March. It costs $599 and features a headset with a microphone and a pair of high-definition screens capable of broadcasting images when connected to a high-powered PC.

HTC has a more detailed privacy policy for its similar HTC Vive, an $800 system created in a partnership with video game creator Valve released 5 April. The smartphone maker’s privacy policy states it “will not share any personally identifiable information with third parties for marketing purposes” without users’ consent.

Facebook to Add News Section To its Mobile App