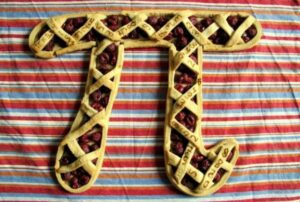 For those who did not pay much attention in math classes, pi is a mathematical constant. It is represented by the Greek letter π and is approximately 3.1416; that is why the 14 of March (3.14) is pi day and it being the year 2016, it is a special pi day (3.14.16), although many people outside the US will not agree because today is 14.3.16 in Europe, but that is a different discussion.

The annoying GIF below will help you better visualize it.

π is an irrational number, meaning it can not be represented as a fraction of two whole numbers (integers), 22/7 is the closest you can get. This also means that no finite number of digits can represent pi, it has been calculated out to one trillion digits and there is no end in sight.

π is a transcendental number, which means it is not algebraic or simply said you can not calculate pi using a formula.

π is a constant and its value always stays the same, except maybe inside a black hole or a parallel universe but nobody has seriously considered testing it.

Humans have been aware of π for over 4000 years, with it being “guessed” over the time at values between 3 and 3.7. The first calculation of pi was done by Archimedes of Syracuse (287–212 BC) but even he knew that he could only calculate an approximate value.

As you can see there is a lot of hype around pi, it pops up all around us, from the spirals of our DNA double helix to the meandering of great rivers, and it deserves every bit of it. Tons of books have been written about pi, some with a touch of humor others for the more advanced enthusiasts. There are movies about pi, you can buy t-shirts or pillows with pi on them and if it was a coincidence or not, Einstein was also born on pi day, March 14 1879.

The Changing Face Of NVIDIA’s GTC: From Graphics And Tools To Thinking Computers