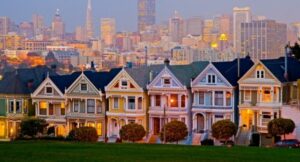 The surge of Silicon Valley’s well-paid employees to San Francisco is pushing rental rates up, Airbnb was the first to feel the residents anger.

The worldwide growth of the technology sector in recent years has attracted growing numbers of specialists to California, with salaries for IT experts exploding. This generation of well-trained and excellently paid workers is no longer content with living in Palo Alto, Mountain View, or one of the other small towns in Silicon Valley, where the headquarters of the technology companies have little to offer. Instead, more and more “techies” push to San Francisco, in the heart of California, located an hour’s drive north of Silicon Valley. The big Internet corporations support this, by offering shuttle services for their employees, with air conditioned buses and – of course – with Internet connectivity.

An estimated 14,000 commute daily between Silicon Valley and SF. The white double-decker buses from Apple, Facebook, Google or LinkedIn that continuously drone through the streets of residential areas, have become a hated symbol of the Valley’s invasion. The limited possibilities to physically expand the city are causing rents to rise. A citizen initiative called Proposition F argued that Airbnb (and its likes) is contributing to the situation by encouraging people to rent out their property short term instead of renting out for families to settle. Airbnb on the other hand, started an $8 million campaign to convince voters that it was helping middle class residents to earn an extra buck. Catch-22: the cost of living goes up you have to earn an extra buck, if you wouldn’t try to earn that extra buck the cost of living wouldn’t rise.

450,000 citizens voted on Proposition F, which if successful, would have stronger regulated  online services like Airbnb in the Bay area. The proposition was rejected with a 55:45 vote.  What started as a citizen initiative is in reality the provisional climax in the cultural battle between Silicon Valley and San Francisco’s residents.

Airbnb feels confirmed in its views and is planning to expand its campaign to other big cities, and the San Francisco residents are fighting the gentrification, of what some believe, is the last anti-capitalist bastion in the States.

From VR, to AR and Holography: The Emergence of Magic

A treat for real Star Wars fans, a new trailer