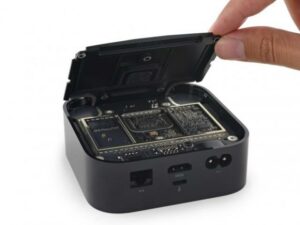 Apple wasn’t very happy with the guys at iFixit, a site dedicated to a community of do-it-yourelfers, after they tore down the latest Apple TV hardware. The site’s developer account was deleted and their App was taken off the Appstore.

In a post on their blog, iFixit announces that the device used was a Dev Kit, provided for developers to create tvOS apps. Apparently they knew what they were doing, as they write on their blog

“We weighed the risks, blithely tossed those risks over our shoulder, and tore down the Apple TV anyway,”

And as expected Apple reacted

“A few days later, we got an email from Apple informing us that we violated their terms and conditions–and the offending developer account had been banned. Unfortunately, iFixit’s app was tied to that same account, so Apple pulled the app as well. Their justification was that we had taken “actions that may hinder the performance or intended use of the App Store, B2B Program, or the Program.”

After losing their app, iFixit plans to channel their efforts into their mobile presence. Some say that the app had numerous iOS 9 bugs, maybe Apple did them a favor, relieving them from a burden.

NVIDIA Gets Serious With Shield And GeForce Now

The shiny mountains of Ceres, still a mystery