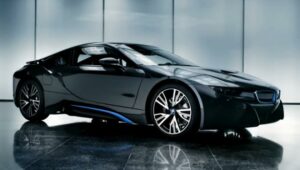 I’m kind of a car nut and have been pushing to have some form of hardened glass move into automotive because I’m tired of the expense of replacing windshields.  In the last 4 or so years I’ve had to replace 5 of them and they aren’t a cheap date costing between $800 and $1k each time.   I was pleased to hear that over the next several years the same kind of glass that has made our phones more resistant to chips and cracking will be coming to cars but was surprised that the reason wasn’t because it was more resistant to breaking.  It has two more compelling elements that are forcing its adoption.

The first car to get Gorilla glass was the tech focused BMW i8, I understand Gorilla Glass now holds the record for the fastest implementation of a new technology in a car and BMW used this for the back window which separates the mid-engine from the cab.  The reason it was specified was because it was lighter and did a better job isolating sound than regular glass.   BMW reengineers the engine sound for the i8 because for a supercar it has a tiny engine and folks expect to hear something far more powerful so they want to make sure the real engine sound doesn’t make it into the car so the engineered sound can enter without interference.

The other reason is that Gorilla glass is not only clearer it can be made far thinner then tempered glass which is typically used in rear windows.  This means that you get less distortion, and given the rear glass of an i8 is at a sharp angle, that lack of distortion is critical to being able to see accurately out of the car.   Because the glass can be made thinner it can save up to 40% of the weight associated with glass in a car.

This last is really important because in an exotic car in particular manufactures will spend thousands of dollars per pound reducing weight and exotic cars, because they generally are low and have sharply raked windshields and rear windows, often have a lot of glass and Gorilla glass can save 20 to 30 pounds or more simply by replacing regular glass and tempered glass.  This should make Gorilla glass in exotics very popular shortly because, coupled with massive carbon fiber structural elements, it can assure the car has the lowest weight possible.

However with the advent of cars like the new Alpha Romeo 4C spider a lot of focus is going into building lower power far lighter cars that still perform.  For them this weight savings is equally important because when you are running against cars with 2 or 3 times the horsepower in your price class every pound counts and the 25 pounds or so that are saved on glass will be critical to the car’s ability to corner and pull 0-60 times in line with similarly priced higher powered competitors.  I understand that this little Alpha, though far from cheap, it a ton of fun to drive and gets amazing gas mileage because it is to light and doesn’t need the power of a huge engine.

However after these classes of car the regular family car is likely going to eventually get Gorilla Glass as well and for a similar reason weight.  Because lower weight equals better gas mileage which is why so many current generation cars and trucks are moving to aluminum frames and body parts.  Get the weight down and you can bring the mileage up and in the US, and other parts of the world, car makers have to hit increasingly aggressive gas mileage averages in order to sell into a country without fines.

While I still personally think that it would be great to just have windshields that don’t chip or crack that often the reasons that Gorilla Glass is coming to cars has little to do with that.  In fact it turns out that the better configuration for glass in the windshield is to laminate Gorilla Glass on the inside because that better protects against catastrophic breakage (it is the inner panel of a laminated windshield that is likely to spray the passengers with glass if it breaks not the outer one).  Still I can hope for Windshields, and would pay more for one (estimated to be around a $100 premium) that would better resist chips and cracks.   Until then what is driving Gorilla Glass into cars is its better optics and its lighter weight, not its better resistance to damage.   Go figure.