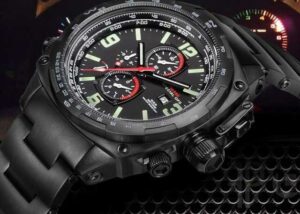 Amazon is facing a court battle in California over charges that it violated trademark laws over watches they don’t sell.

It’s a bit tricky but here’s the gist. Watchmaker Multi Time Machine (MTM) is suing Amazon for suggesting alternatives when people search the online store for MTM watches. The reason that Amazon suggests alternatives is because of the fact that they don’t sell MTM watches.

MTM contends that by not telling shoppers up front that they don’t carry MTM watches that leads to confusion and that leads to trademark infringement.

But federal judge Carlos Bea stated that a trademark is infringed when it is used “in a manner likely to cause confusion as to a good’s source, affiliation or association.”

Yet Amazon doesn’t use MTM’s trademark, doesn’t claim the watches they sell come from MTM or that they are in any way associated with MTM so how does that cause confusion or infringes on MTM’s trademark?

A dissenting judge, Barry Silverman said, “In light of Amazon’s clear labelling of the products it carries, by brand name and model, accompanied by a photograph of the item, no rational trier of fact could possibly find that a reasonably prudent consumer accustomed to online shopping would likely be confused by the Amazon search results.”

A person walks into a department store and says, ‘I want an MTM military-style watch.’ The salesperson says, ‘We don’t carry MTM watches, but if you’re looking for a military-style watch we have Tourbillon, Suunto, Lum‑Tec and G-SHOCK watches. Would you care to look at one of those?’ That would be fine.

But if the salesperson simply said, ‘If you’re looking for a military-style watch we have Tourbillon, Suunto, Lum‑Tec and G-SHOCK watches. Would you care to look at one of those?’ That would be trademark infringement.

I don’t know about you but searching for products on Amazon almost always brings up some sort of quasi-related items (some not even close to the original search) and even if I’m shopping for a particular brand they make it pretty clear that some of the search results include products from other manufacturers.

It’s not like Amazon is advertising a sale on MTM watches and then pulls a bait and switch at the last minute.

Metalheads Are Healthier Than You Think

Official Ant-Man Reviews Are In