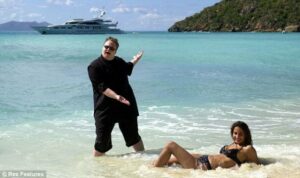 Kim Dotcom made a fortune with Megaupload but in 2012 authorities in New Zealand raided his mansion, seized his assets and accused him of enabling $500m in illegal downloads of pirated Hollywood content.

He lost his wife.

And, he could lose his liberty and end up in jail. It’s worth reading up on this guy’s Wikipedia bio because the man likes to get into trouble and live large. We’d take this guy over Mark Zuckerberg or Larry Page any day. Boring Internet billionaires. Hah!

Mercifully, he has not lost any weight so, he can’t be stressing the legal hassles.

First Blackhat Reviews Are In