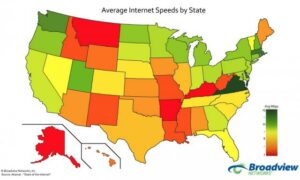 Nope, that distinction goes to Virginia and not the home of the tech industry that fills all those Internet pipes.

By analyzing data acquired from Akamai’s “State of the Internet” report, Broadview Networks has created a color-coded map showing the average Internet speeds of each state.

And the results are somewhat surprising because in the first quarter of 2014, Virginia comes out on top with an average speed of 13.7 Mbps. And the Eastern seaboard seems to keep winning with Delaware and Massachusetts tied for second with speeds of 13.1 Mbps. Next comes Rhode Island with 12.9 Mbps, and Washington DC with 12.8 Mbps. The west finally shows up next with Washington state getting in the top tiers with 12.5 Mbps but then it is back east with New Hampshire with 12.3 Mbps.

To be honest, you may not be surprised by the slowest states, with Alaska at the bottom of the pile with an average speed of 7 Mbps. Arkansas, Kentucky and Montana were only slightly better with 7.3 Mbps, followed by West Virginia (7.5 Mbps), Mississippi (7.6 Mbps) and New Mexico (7.6 Mbps).

And here is the big shocker, California ranks 20th, with an average speed of 10.9 Mbps.

However, Internet speeds don’t tell the whole story. It might mean Netflix streams run a little faster but a lot depends on your ISP and as we know, someone them may be throttling back for some services, or taking money to provide a fast lane.

In addition, you have to look at the overall quality of the user’s equipment, too because while Virginia may have the best Internet speeds it may have the slowest computers. We don’t know but the point being that you have a lot of other factors in play.

This report doesn’t really measure quality of service or user experience. Nevertheless, we think California needs to do a lot better. It just doesn’t seem right that the home of Silicon Valley doesn’t even rate in the top ten.

Weaponizing cats: one hacker takes it too far