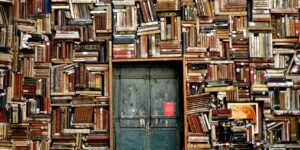 Let’s take a book from our personal library. As we look at it we may notice that it has length, width and thickness, respectively, which correspond to the three dimensions of our space. It is commonsense to consider that all objects in a three dimensional space have also three dimensions.

Now, as we browse the book we might notice that the pages of book have two-sides. We may extend our observation to all objects around us and notice the two-sidedness of all of them. You may not think at this trivial aspect as being a feature of spacetime. And yet! This peculiarity of the objects around us is also a feature of spacetime; the spacetime itself is a two sided surface.

We may also came to the conclusion that our world is two-sided if you have knowledge of another geometric property of two-sided spacetimes, namely this peculiar spacetimes poses a definite orientation for the arrow of time. Since we all experience time as flowing irreversible from the past to the future, having an inexorable direction, we may think we are living in a two-sided world.

Still, there may be worlds out there that could have only one side. The objects in these worlds can only have one side. Now, let’s make a simple exercise of imagination and picture us reading our book in a one-sided spacetime. Hard to believe but you will be able to read both sides of the book’s pages in the same time, in other words you don’t need to browse pages anymore. To see this explicitly I encourage you to cut a sheet from the book (just kidding!) and glue it as in the picture, forming a trivial Mobius strip:

This is the most known one-sided surface. Now you can read both pages at once. There is more to add to this story. In a one-sided world, the time has no preferred orientation; it may flow from the past to the future or in reverse from the future to the past.

Now, since every page on our book has two sides, we may ask where the other side of the universe is and how can we get there? The answers may be found in the recent paper “Quantum entanglement, two-sided spacetimes and the thermodynamic arrow of time”, posted in the physics online archive arXiv (https://arxiv.org/abs/1904.04012), and elected one of the best by MIT Technology Review, where such scenario is presented.

We further will delve into technical details such that we should first describe the ensemble picture. To outline the overall picture we have to emphasize on some prior pieces of scientific work that can be linked to the pieces of a puzzle. In what follow we will take a close look to the pieces we need and eventually, in the end, we put the pieces together and solve the puzzle.

As suggested from the title of the paper, quantum entanglement is the key piece in the puzzle, such that we should start by defining this weird quantum phenomenon.

Entanglement is the strange quantum process in which two quantum systems (usually two quantum particles) share the same existence. In a quantum realm, particles that interact can become entangled in such a way that they exist in a single quantum state. In this state, a measurement performed on one of the particles can reveal information about the other particle, no matter how far apart the particles are.

A discovery in a paper (https://arxiv.org/abs/hep-th/9711200) from 1997 by physicist Juan Maldacena, now at the Institute for Advanced Study in Princeton, New Jersey announced the birth of the renewed gravity/quantum field (AdS/CFT) correspondence conjecture. According to this conjecture, certain quantum gravitational theories with fixed spacetime asymptotic behavior are exactly equivalent to ordinary quantum field theories.

Based on this conjecture, in a paper in 2001 (https://arxiv.org/abs/hep-th/0106112), Maldacena demonstrated that by entangling particles on one black hole with particles on another black hole, he could perfectly describe the wormhole connection between the black holes in the language of quantum mechanics. In this context, entanglement is equivalent to physically tying chunks of spacetime together.

Building up spacetime with quantum entanglement

Van Raamsdonk has shown in 2010 paper (https://arxiv.org/abs/1005.3035) that if the two quantum systems are not correlated to begin with, they correspond, according to gravity/quantum field duality to two separate components of spacetime. On the other hand, considering the second Maldacena’s paper, when the quantum systems are initially entangled in a particular state, the two separate components of the spacetime are classically connected.

Now, Van Raamsdonk wondered, what would happen to this classically connected spacetime if the entanglement between the two dual quantum systems is removed? He was able to answer that question using a proposal introduced in 2006 by Shinsei Ryu, now at the University of Illinois at Urbana–Champaign, and Tadashi Takanagi, now at the Yukawa Institute for Theoretical Physics at Kyoto University in Japan. Their equations allowed him to reduce the entanglement, and to watch the response in the dual spacetime, where he saw spacetime gradually pulling apart. Ultimately, he found, reducing the entanglement to zero would break the spacetime into two disjointed chunks.

Quantum entanglement as geometric glue of spacetime— this was the essence of Van Raamsdonk’s paper.

The same arguments of the initial conditions between two quantum systems were reiterated recently in studies related to thermodynamics arrow of time. The existence of an arrow follows from the second law of thermodynamics. The law states that entropy, or disorder, tends to increase over time, which is why everything in the world around us appears to unfold forward in time. The arrow of time is an arrow of increasing correlations. Sure, the second law assumes there are no initial correlations between particles.

But what happen in the presence of initial entanglement between two quantum systems, we may ask? Well, the things change dramatically in this scenario. Lately theoretical work suggests that the quantum entanglement places extra limits on the two systems resulting in the impossibility of entropy to increase further. As a result, the entropy can only decrease which can determine the thermodynamic arrow to reverse and flow from the future to the past. In a recent experiment (https://arxiv.org/abs/1711.03323) Micadei and co manage to observe this reversed arrow of time.

Having all pieces in place, now it’s time to assemble them and see the whole picture. We start with two quantum systems initially uncorrelated. As we have seen these are intimately related to a spacetime having two disconnected components. It is more to add here! Since there are no initial correlations, the time is oriented in the standard thermodynamic direction; from the past to the future. In other words, our day-by-day sense of time flowing. This state of fact is consistent in the dual gravity side with a spacetime having a preferred orientation of time, a time-oriented spacetime so to speak.

Now, let’s consider the two quantum systems are entangled, to begin with. This system is consistent in the dual geometry with a spacetime having the two components classically connected. As we may expect, there is more to add here too! The entanglement constrains the individual entropies to decrease such that, this time there is no opportunity for the dominance of one orientation of time over the other. We have no preferred orientation of time. This fact is translated in the gravity dual as a spacetime with no predefined orientation having two connected components, a time-unoriented spacetime, in other words.

In this logic we can emphasize further that quantum entanglement builds a connection between the two sides of a two-sided spacetime.

Our story could end here and remain with the stunning conclusion that our universe must have a second side that we do not have access to. We only can contemplate our side of the universe full of the stars we contemplate in the night. But we will miss the best and in the same time, the oddest part. According to the paper, in the other side of the universe the time runs backward, from the past to the future. Accordingly, if you reader would somehow reach the other side of our world you will “grow” younger in respect to the people you left behind.

Still how can this other side of the universe be reached? Well, this is not really part of the paper in discussion but we can easily speculate when you have Maldacena on your side (of the universe).

Now we totally complete the puzzle! To sum up, we may conclude saying that our universe must have a second side where time runs in reverse, from the future to the past, which can be accessed throughout the eternal black hole.

And yes… inside the black hole you can read both sides of your page of the book at once!