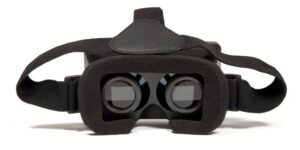 Virtual reality has made a huge amount of progress in recent years. The giant headsets first appeared in the early 1990s, with graphics that made you feel slightly sick and virtual worlds that you were very unlikely to confuse with reality. In years to come I’m sure people will look back and laugh at the ‘futuristic’ tech we have today, but for now, virtual reality headsets are the latest tech-geekery to get us all excited and hot under the collar.

If you want to enjoy the VR fun that all your friends are talking about, then you should first decide on what headset you need to buy. If you’ve already invested in a Playstation 4 then the Playstation’s own VR is currently the only one compatible. With a resolution of 960 by 1080 pixels per eye and 100 degrees field of view, Playstation fans are arguably the lucky ones, with the Playstation VR being touted as the ‘editor’s choice’ by PCmag and boasting a number of great reviews on Amazon.

You’ll not only lose track of time, you’ll also completely forget where you are whilst using the headset. You can enjoy multiplayer games with people who use ‘normal controls’ thanks to the Social Screen, which projects the game onto a normal TV screen. So as a Playstation 4 user, you are limited for choice when it comes to your VR headset, but it’s a very well built and impressive piece of kit that plugs in without any hassle.

The front runners in terms of PC headsets are the HTC Vive and the Oculus Rift. The HTC Vive will set you back around $800 or £800 in the UK. One important thing to note is that the Vive requires installing 2 satellite sensors in the corners of your room, that must be higher than 6ft. One Amazon reviewer also suggests that you need a room that is at least 2m by 2m in terms of dimensions to make it worth while. The wire for the headset is long and requires 3 USB ports, luckily there is a sensor which tells you if you are going to walk into a wall. The HTC Vive is generally regarded as powerful and astounding in terms of graphics and gameplay, it is just a bit of a pain to set up and get running, and requires a pretty powerful PC to work.

The Oculus Rift currently costs a little less than the HTC Vive, at $600 or £500 in the UK, with additional controllers setting you back an additional £100 or so. There is a range of PC specifications in terms of compatibility, with graphics cards required to be the same standard as NVIDIA GTX 970/AMD R9 290 or greater, processor should ideally be Intel i5-4590 or faster and 8GB+ RAM required in terms of memory. Good news if you have an Xbox One as well however, since December 2016, the Oculus Rift is compatible.
In order to enable VR streaming and compatibility with the Oculus Rift, Xbox One owners need to:

Back to PC users again for now – the Rift comes with 3 free games and each game and application comes with a ‘comfort rating’ to pre-warn users about how intense the gameplay will be, from little or no movement to intense experiences with more complex movements.

The set up is fairly straight forward and involves downloading the set up program from the official page. Make sure you clear some room beforehand to ensure there’s room to set all the hardware up. Plug the HDMI cable into your GPU (Graphics Processing Unit) and the USB cables from the headset and the sensor into USB 3.0 port, and finally the controller into any left over USB ports! Next is setting up the sensor which basically just asks for your height. One thing to note is that the headset can be adjusted by Velcro straps at the side and the top (many people miss the ones on top).

With a cheaper retail price and a growing list of amazing games and movie apps, the Oculus Rift is leading the way in terms of VR for the PC. Both headsets will no doubt improve on the clunky set up at some point in the future and there’s not getting away from the eye strain that can be caused with game player lasting more than half an hour or so.

For those of us that don’t have a fancy PC or a PS4, we can feel a little left out with all the VR hype. If you do have a smartphone however, you are still able to jump on the VR bandwagon with the rest of them. The Google Daydream is still touted as the best VR headset available for smartphones, with a headset and a controller, you can immerse yourself in exotic and foreign lands and interact with amazing VR gameplay. In fact, for a small price you can even enjoy a VR holiday with Darwin Escapes thanks to their new app and VR cardboard – so no arguing over what to do on holiday, you can experience everything separately or together – but you’ll still probably need to keep an eye on the children somehow!

Whichever headset you opt for, VR could literally change the (real) world which we live in. With applications relating to surgery, education and mental health to name but a few, it’s all very exciting. What a time to be alive!