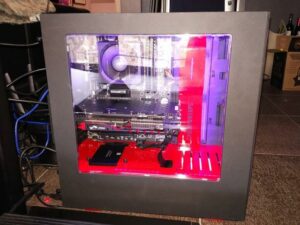 One of the interesting things I’ve been observing with regard to the near forced march to mobile devices is the increased need for a desktop computer where you can just sit and get work done.   With all of the background sync capability in the various platforms provided by Amazon, Apple, Microsoft and others the old annoying problems of keeping you files in sync across multiple devices is pretty much over.  You can pretty easily start creation on one device today and finish it on another.

Gaming, although clearly increasingly focused on mobile devices, still favors desktop computers for the most engaging and realistic games and VR, in its most realistic form, will require the kind of graphics performance that few laptops without access to a desktop graphics card will be able to enjoy.   Seeing this as an opportunity AMD just refreshed its desktop processor line and introduced a new fan, the Wraith Fan, and although I personally still prefer water cooling for a bundled fan it isn’t bad.

Let’s talk about the return of the desktop PC this week.

The Advantages Of A Desktop PC

Like many I still live off a desktop PC when I’m working in the office.  It is simply great to walk in, sit down, wake up the machine and start working.   I’m not fast cycling my laptop battery, this is what happens when you work on most laptops while plugged in, which lowers its battery life dramatically over time and find that at the end of like for my laptop the battery is still pretty much as it was when the laptop was new as a result.   I used to be able to pull the battery out of my laptop to keep it from wearing out in desktop use but with these new sleeker designs that is no longer possible (and frankly I rarely remembered to do this even when I could).

The additional advantage is that if something happens to your laptop you always have a backup both in the cloud and on your home machine so that you can either pull the file down from the web or have your spouse mail you the critical file.

Gaming is far better with a desktop computer largely because of the additional performance you get in it and as we move to Virtual Reality the aggravation of hooking and unhooking all the gear from a laptop, even if you had one that could do the job, would likely justify a desktop computer all by itself.

Finally you can build your own desktop computer, configure it just as you like it, and with AMD’s announcement you can build a pretty nice machine full sized PC for under $1K, a nice micro PC for around half that,  or upgrade your existing machine for far less.

This week AMD announced their new desktop processor lineup.  Top of the list is their new FX 8370 with the Wraith fan.  This is a high performance low noise fan that comes bundled with this processor.  It comes with a lot of performance for the price and it is very affordable.  For $560 you can get their new Radeon R9 380x graphics card, this processor, and one of the 990FX motherboards designed to pull this all together.  Toss in a nice case, memory, and a 500 Gig SSD drive and you should still be able to have a decent gaming or work from home desktop for around $1,000.

Personally I still prefer water cooling but it is often a ton easier to put together a system with an air cooler like the Wraith because you typically don’t have to change out the fan mount and never have to worry about routing the water pipes (plus you can generally mount the fan last) I can’t tell you the number of times I’ve gone to mount the fan after putting everything else together only to find the fan mount has to be changed and it all has to come back out again to do that.

The Wraith even has an LED light to make it look more upscale which really isn’t bad for a bundled product.   Now if you want to build a new PC on the cheap, and I have several of these set up as stations around the house for various reasons, you can pick up an AMD A10-7860K APU and an AMD A68H motherboard to put into a Corsair Graphite series case.  (I really like this case) and you are out the door for around $500 and with a pretty decent highly portable desktop computer.

One final thing I almost forgot these systems, for gaming, will likely work best with one of the new FreeSync monitors.  I use the 34” LG 34UM67 myself which comes in just over $400 which is a pretty decent price for a 34”.  This matchup eliminates tearing and stuttering that can occur if the monitor and graphics card are not matched.   (Be aware that FreeSync only works with Display Port).

If you have the room, and you don’t need much, a desktop computer is actually a pretty good addition to your laptop computer.  It will not only help your laptop battery last longer but a desktop is just handy to have as your primary workstation, gaming station, at home and it’ll likely become critical if you decide to move to VR.   With AMD’s configurations you can build a decent rig for around $1K or an adequate small PC for about half that.   If you want a project while you are sitting in the house waiting for warm weather your own PC project is a pretty decent and reasonably low cost effort to kill time.

By the way, add $120 for Windows 10 Home on a flash drive if you don’t have an OS disk set you can use for your new system.  It still amazes me how far this platform has come and how easy it is to install on new hardware.

Able2Extract, a PDF wizard everyone needs