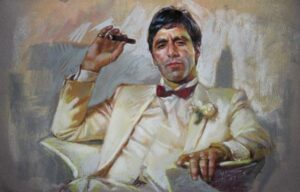 I’m a huge Scarface fan, who isn’t?, and a big appeal of the film is how large Tony Montana lived. Before he went down in a blaze of glory, the guy lived in a hell of a big mansion, which could be yours if you’re a high roller too.

According to the NY Post, the mansion in Scarface is now on sale for $34 million, and if you’ve got the money, it’s in Montecito, CA. The house sits on ten acres with four bedrooms and nine bathrooms.

According to this report, the house was built in 1906, and it went under a major renovation, although the house still has a lot of its key features, like a painting of Alexander the Great on the dining room ceiling. (I don’t remember that in the movie, and screenwriter Oliver Stone of course later directed the Alexander the Great movie with Collin Farrell.)

So like the saying in the movie goes, the world is yours, and if you can afford it, so is Tony’s palatial gangster mansion.