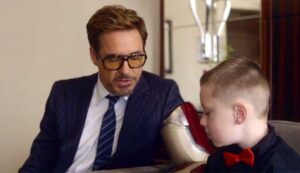 Many will tell you that robotics will be a big key to the future of medicine, and as we saw with Big Hero Six, we could one day have robots that probably completely take the place of doctors, but could come pretty close.

Robotics are of course giving people new, functional limbs when needed, and now Robert Downey Jr. has personally given a 3D printed arm that was created in the Iron Man mold to a young boy.

As The Verge tells us, the arm was 3D printed, and it only cost $350. It was created for the young kid named Alex, who is seven years old, by a company named Limbitless Solutions, a non-profit organization who pooled together their “coffee money” to make this arm.

It’s remarkable what can be done today with robotics and 3D printing, and the fact that it’s giving a seven year old kid a new limb, and Robert Downey Jr. gave it him as well, well how cool is that?

Fans Demand a Reboot of Call of Duty Modern Warfare 2